Fishbone + Ishikawa = Fishikawa! We know him best for this essential root cause tool, but did you know Dr. Ishikawa developed the first Kaizens, aka Rapid Improvement Events? And where would we be without his 7 Basic Quality Tools? Check out this Fishbone Webinar created in his honor and get ready to buy a lot of birthday candles!

July 13th would have marked Dr. Ishikawa’s 105th birthday and he is more like a Great Great Grand-Daddy of Quality! It’s no wonder that Dr. Ishikawa lived so long because he was clearly determined to do a lot in his lifetime. He wrote books, developed quality conferences, was an editor on boards of quality publications, a member of the Deming Prize committee and the winner of the Shewhart Medal – just to name a few of his accomplishments. He worked with two other top quality gurus, Dr. Deming and Dr. Juran, in the early 50’s and is credited with being part of Japan’s post World War II rise to manufacturing greatness.

He invented the Fishbone Diagram – renamed the “Ishikawa”!

Dr. Ishikawa created the Fishbone Diagram for cause and effect brainstorming and it has long been one of his proposed Seven Basic Quality Tools. It allows groups to conduct structured brainstorming but it is elegant in its simplicity. How to use it? Simply put the problem into the head of the “fish,” list the major categories of causes and then brainstorm to get to root cause! 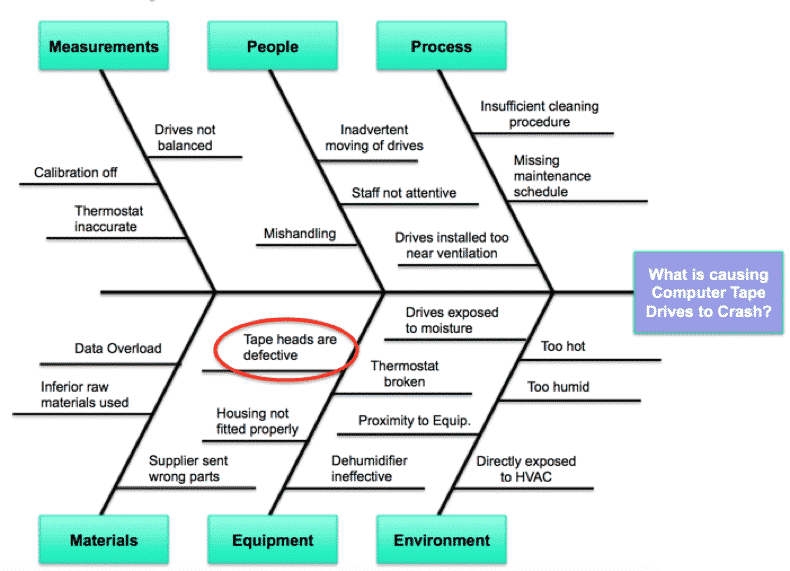 The above example is from the IBM mystery of crashing tape drives.

Classic Categories of Root Cause:

The major categories can change based on the process, and the Fishbone is even more powerful when paired with the 5 Whys, a gift from his fellow countryman Sakichi Toyoda.

He invented Quality Circles which led to Kaizens (RIEs)

Dr. Ishikawa is better known in Japan for Quality Circles than he is in the USA, but they are still ground-breaking since they paved the way for the modern day Kaizen or Rapid Improvement Events.

Dr. Ishikawa did not expect Quality Circles to catch on beyond Japan, but they quickly spread to over 50 countries and they live on as a modern Lean technique.

Dr. Ishikawa did not expect Quality Circles to catch on beyond Japan, but they quickly spread to over 50 countries and they live on as a modern Lean technique.

Kaoru Ishikawa at the Bahama Bistro:

He wrote many books including “What is Quality Control?” and “Guide to Quality Control” although he was very clear that standards should not be “controlled,” rather they had to constantly change to address customer needs.

Dr. Ishikawa’s legacy is much bigger than the sum of his accomplishments. Everyone who writes about him acknowledges his sincerity, transparency and concern for employees. ASQ developed the “Ishikawa Medal” to recognize those who champion the human side of quality. This is a fitting tribute since, aside from his great works, Dr. Ishikawa’s greatest gift was his focus on the happiness of workers.