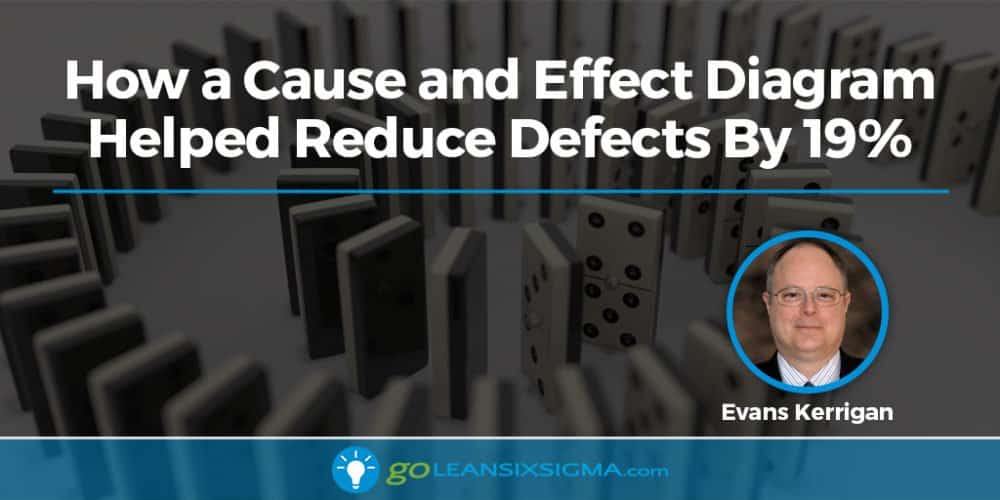 When organizations want to address an issue, they frequently bring people together to determine what actions to take. Often, part of the group’s process is to brainstorm about what causes the issue to happen in the first place. Maybe you have been in one, or several, of these situations with your firm.

When faced with meetings around determining what causes a problem, we frequently find that many Lean Six Sigma process improvement teams don’t get past the “Usual Suspects” to look for other root or contributing causes. Have you been in a situation like this where one of the early possibilities offered was around people, and the entire idea generation became identifying the guilty party? Or one where Training was identified as the cause and the group failed to look anywhere else?

A great Lean Six Sigma process tool to use for situations like this, to ensure you are really uncovering all the possible causes of issues, is the Cause & Effect Diagram. This tool is also referred to as a Fishbone Diagram, or Ishakawa Siagram.

Using a Cause & Effect Diagram at a Financial Services Company

Let’s use a simple example from the Financial Services field. This company assigns tasks to ensure that all customer queries are addressed appropriately. They have a set standard to address greater then 95% of those inquiries within 5 days. Many of these tasks require handing off to another person to address for further research. When people talked about tasks as a problem, a few of the frequent explanations were that “other areas don’t care” and “people are lazy”. Do either of those sound like familiar reasons used to describe any issues in your business?

22% of tasks were not being completed within the specified standard of five days.

The issue the financial company faced was that rather than 5% exceeding their standard, more than four times that much, 22% exceeded the five days. There was pressure put on the staff to work harder and make it happen, but the results did not move much.

Frustrated with the lack of movement, the group decided to gather a small team to determine what the causes behind the delays could be. This team had representatives of the areas responsible for both creating and completing the tasks. There were a couple of members of the supervisory team, but most team members were people that actually did the work.

The Cause & Effect Diagram to the Rescue

Rather than simply brainstorming a list of reasons, the team used a Cause & Effect (Fishbone) Diagram to ensure that we got out all the potential causes of the effect we were dealing with, the “late tasks”.

In a Cause & Effect, the effect you are attempting to understand is placed in a box that the right hand side of the diagram. It is important to agree of the effect you are trying to solve for. Include information about the “what”, “when”, “how much” and “where” in your statement.

The tool is frequently called a fishbone, because categories are used to ensure the team fully explores the issues. These categories become the major bones of the fish. For this project, the team used the following six major bones for their fish:

As the group began to uncover potential causes, it became clear that there was a lot more going on than people not caring. As the group continued filing in the Cause & Effect, an active discussion took place around some of the systemic limitations that the representatives had to deal with in the tasking system.

The group found contributing causes against every major bone of the fish. As with many other groups, we found there were multiple issues that contributed to the overall defect rate for the group.

One of the issues involved a certain type of tasks that by policy were put on a three-week delay before being completed. This accounted for over 5% of the tasks in excess of five days. The target of 95% completed within five days was not possible without changing this single policy even if all issues were completely removed. Calculating the responsiveness around tasks needed to take into account how long it took to complete the task when done properly.

Another limiting factor was the lack of reporting and visibility around tasks in the system. Tasks were not separated in reporting by the type of task, to allow feedback around responsiveness. This issue was able to be resolved and with the increased awareness of the issues, some of the simpler tasks began to be followed up on more quickly.

This change also led to creating clearer expectations and service level agreements between the departments around responsiveness for specific types of issues.

Multiple systems were a contributing factor and it was determined after further analysis that the majority of the issues came from one of the two systems.

Using the Cause & Effect tool moved the discussion from the “usual suspects” to a fuller discussion and appreciation around the multiple causes contributing to the responsiveness to completing tasks.

We can report that the percent of tasks that can be completed within five days that are actually completed in that timeframe, is running above 97% at most recent count – a 19% improvement over the original completion rate and 2% higher than the standard goal.