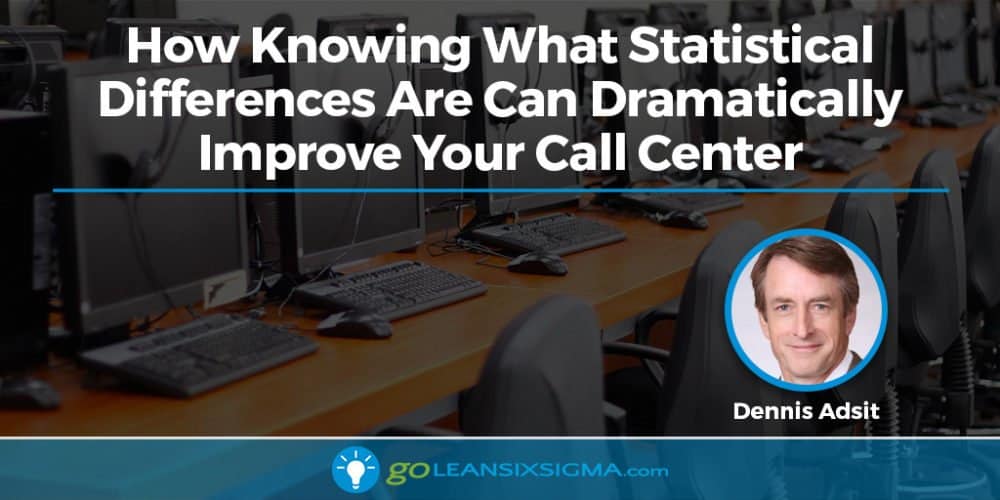 If you’re not tracking statistical differences among your call center agents, I’d argue that you are missing out on a huge opportunity to drive astonishing improvements in your call center outputs.

We’ll first make sure we know what statistical differences mean and then talk about the myriad ways you can leverage them.

Some of you clicked on this link because you thought, “Ha! I took stats in college…I’m trained in Lean Six Sigma…I know what “statistically different” means. This will be easy!”

An Example and a Reframe

Let’s first get grounded with an example. Say you had the performance of 100 agents on some measure like Customer Satisfaction (CSAT) or First Call Resolution on thousands of phone calls. Let’s further say that three of those agents were statistically different (we’ll say in this case, better than the rest of the agents) at a p-value all less than .01. For those of you unfamiliar with the p-value, it’s the probability of the difference being due to random chance.

This means that the higher performance we are seeing for each of the three agents has less than a 1% probability of being due to chance. In other words, it is highly likely these agents really are better than the other 97 agents handling calls…they may be smarter, they may be friendlier, they may better remember what to do, they may be easier to understand, they may be better at small talk or some combination of all the above.
Another small group of agents could be statistically worse and the implications would be the same…unlikely due to chance…something about those agents and their process/approach is not as good as the rest of the floor.

What process? It goes by different names. Some refer to it under the umbrella of the Employee Lifecycle process. Some speak of the individual processes: recruiting, hiring, training, compensating, and performance managing (agent metrics, coaching, job aides, etc.) processes.

There are systems in place to conduct all those activities. And the output of those activities is the current group of agents you have on the floor. Do a better job of recruiting and the performance output distribution will improve. Improve the validity of your selection process and your performance distribution will improve. Train better and, well, you get the idea.

Here is the first important implication of statistically different performance. If you have three agents that are statistically worse, it is highly likely you can let those agents go, and then recruit, hire, train etc. three replacements, and those replacements will perform significantly better (in fact, there is over a 95% chance all three replacements recruited, hired and trained with your existing processes would be better than the agents you let go).

If you have three agents that are statistically worse, it is highly likely you can let those agents go

The same would not be true if you randomly picked three agents at, say, the 20th percentile of floor performance and fired them. When you recruited, hired, trained etc their three replacements, there is only a 50% chance all three of those replacement agents would perform better than the three you cut loose.

The second important implication has to do with how statistically different agents are managed. Agents that are statistically worse (assuming these are not brand new agents and their performance has stabilized) should be put on a short leash and given a modest amount of remedial coaching/training. If their performance improves, great. If not, let them go and hire replacements. Don’t mess around.

For the agents that are statistically better, there are two important implications. First, unlike the agents that are statistically worse, if the better agents quit or take jobs off the phone, there is almost a zero chance you will be able to recruit, hire, train three new agents that will come anywhere near the performance of the three that left. In short, you don’t want to lose them because there is little chance you will be able to replace them with agents that will perform at that high a level.

As such, you should do whatever you have to keep these agents on the phones. Raise their base pay. Give them variable comp for maintaining their high performance. Make them take a pay cut if they want to get off the phones, which is what every agent is dying to do, so they have to think twice.

There is a good chance you can identify some likely causes that can be incorporated into the Recruiting, Hiring, Training, and Performance Management processes that will, over time, lift the performance of the entire floor. For example, let’s say the better agents seem to be some of the smartest agents on the floor. This suggests that you should be using a Cognitive Ability test to hire all your agents. If the best agents have developed some useful job aides or shortcuts, why couldn’t they be disseminated to everyone?

If the best agents have developed some useful job aides or shortcuts, why couldn’t they be disseminated to everyone?

But there is zero chance of identifying these best practices and leveraging them unless you study these statistically better agents. The sad reality is that this is almost the exact opposite of what most call centers do. They not only don’t study their best agents, they actually ignore them. The Quality Monitoring team thinks, “They’re doing fine…I don’t need to spend a minute monitoring them. Let me focus on these agents that are below the 50th percentile.”

Really the most important conclusion here is that if you are not looking for statistical differences between your agents, then you are missing critically important information that can be used to improve your operation, which is exactly what is happening in most call centers.

For some reason, many if not most call centers seem to be allergic to statistics. There are plenty of “call stats,” but astonishingly little understanding of statistics like Analysis of Variance or Analysis of Means or Control Charts to help you look for, understand, and learn from real difference in performance.

Call Centers seem quite happy looking at Quartiles, as if they were a meaningful place to draw lines in the sand. They give up on the 4th quartile or bottom 25% of agents and fire them. Or they try to make their lives miserable and hope they quit despite the fact that the resulting turnover adds real costs and, as explained above, there is a low probability the replacement agents will be better.

They often ignore the top two quartiles as well. They say, “Why spend any time coaching them since they are already better than average?” The result is they devote all their coaching resources to trying to get the 3rd quartile “over the (mean) hump.”

The truth is every group of agents can be put into a distribution and sorted into quartiles on any metric.

Approaches like this make W. Edwards Deming roll over in his grave. The truth is every group of agents can be put into a distribution and sorted into quartiles on any metric. Quartiles are a fact of distributions! There is always a top 25%, a bottom 25%, etc. “Treating” the 3rd quartile agents with coaching is akin to treating common cause variation as special cause variation. Even Green Belts know this adds variation to the system and does not help it improve.

However not every distribution of agent performance contains statistical differences. The statistically different agents are special cause variation. And “treating” them…appropriately…helps the system improve.

Manufacturing has been using statistics to improve their operations for over four decades. In the era of Big Data, the dissembling coming out of Call Centers on why they are not doing the same is not only boring, it perpetuates the mediocre, same-as-it-ever-was, results.

Dennis has been helping individuals and organizations reach higher levels of performance for over 25 years. His experience as an HR Director, an operations executive, a coach and consultant alongside his Ph.D in Industrial Psychology brings a depth of experience to Call Center operations, Process Excellence, Organizational Development and change leadership.
Poll
Need great pricing for your team?
Get a Quote
[templatera id="117317"]
Copyright GoLeanSixSigma.com - All Rights Reserved
Cart
Search