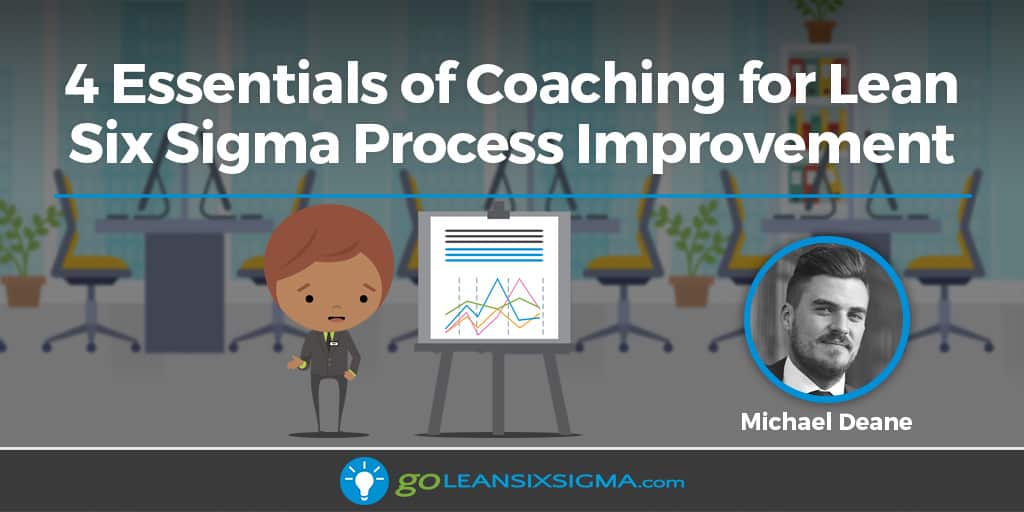 Before we cover the subject of what is necessary for good Lean Six Sigma coaching, we have to make a clear distinction between training and coaching.

With Lean Six Sigma training, the individual or the organization undergoes an intense course during which they learn about Lean, Six Sigma, the concepts behind these methods, the ways to apply them and more. It is intellectually hard work and a lot of new information has to be learned.

Coaching, on the other hand, involves a one-on-one interaction where a coach focuses more on a specific case (usually a single project) and practical use of the Lean Six Sigma knowledge. Of course, this invariably leads to reinforcing one’s theoretical knowledge of the method.

The following 4 tips cover how to best approach coaching someone in Lean Six Sigma and what mistakes to avoid.

This is something that long-time Lean Six Sigma coaches know well, but it requires extra emphasis for newer Green and Black Belts who may not have had as much coaching experience—you have to understand your role as a coach.

While expert Lean Six Sigma knowledge is essential to coaching the method, there is also the coaching part which is sometimes unfortunately overlooked. This happens with all forms of coaching—the presumption that simply being a subject matter expert automatically means they’ll be great coaches.

The most important aspect of coaching you have to truly understand and adopt is that you should not always rush to solve any problems a coachee might encounter. You should guide them and let them come to a solution themselves.

You should not always rush to solve any problems a coachee might encounter. You should guide them and let them come to a solution themselves.

For instance, as a Lean Six Sigma coach, it is not your job to solve your coachee’s problems and hold their hand throughout the process. You are more of a guide. You have probably proven yourself as a great problem solver (since you are in a position to coach) and it can be difficult to suppress those problem-solver instincts, but it’s critical to do just that.

You also need to listen carefully and actively, carefully assessing the progress your coachee is making, analyzing what they could do better and how to guide them to this realization.

You want to practice patience and show support even when you feel like there is a simple, direct answer to a conundrum they are facing. Once again, you are not there to solve their Lean Six Sigma problems—you are there to show them how to recognize issues and help the learner move in the right direction.

The list of requirements for becoming a good coach is a long one.

You are not there to solve their Lean Six Sigma problems—you are there to show them how to recognize issues and help the learner move in the right direction.

2. Make Sure Everyone Is on the Same Page

Another essential part of coaching for Lean Six Sigma is ensuring that both parties are 100% clear on the following:

Discussing and formalizing these decisions beforehand will ensure that no time and resources are wasted and that defects are prevented instead of detected, which is at the very core of the Lean Six Sigma method.

For the most part, Lean Six Sigma coaching will be conducted throughout a project of some kind—from its inception to its closing and post-closure period. This is the best way to make sure that coaching covers all the intricacies of Lean Six Sigma as it applies to a process. (Of course, if the focus of training is on a specific aspect of the process, coaching might not cover the entire project).

As a coach, you will ask the coachee questions that illuminate the PDCA and DMAIC methods, as well as other methods and tools that are used in Lean Six Sigma such as 5S, 8 Wastes, Control Charts and FMEA. As you discuss the questions (and the coachee’s answers) together, you will guide them to their own conclusions and solutions.

Of course, as the project evolves, you will follow its flow and modify your coaching as you discover new information on the coachee’s knowledge, approach, and solutions.

It would be a moot point predict how this might develop and you will need to use your judgment to come up with your next steps.

The GROW Model was developed in the late 1980s, early 1990s to help coaches and, while not a Lean Six Sigma concept, it can be a huge help in coaching Lean Six Sigma.

As you would expect, GROW is an acronym that stands for Goal, Reality, Options and will. We’ll expand on the method.

In our case, what is the coachee looking to accomplish? The standard SMART goal guidelines work best here (yes, another acronym).

For instance, a goal for the coaching project could be to “improve the coachee’s ability to complete the DMAIC Control Phase within 2 weeks by end of Q1.”

In terms of Lean Six Sigma coaching, this would entail helping the coachee understand where they stand in respect to the previously agreed-upon goal (we will stick with the same example we used above).

The coachee is probably aware of what they could be doing better, to a greater or lesser extent. Your goal as a coach here is to help them realize exactly where they are, what they need to focus on and how to improve their working DMAIC knowledge or practical application. Do not tell them—help them realize it for themselves.

For instance, they might have encountered difficulties with only one of the aspects of the Control Phase, such as establishing a monitoring system. Or, it might be a more systemic issue of missing the vital reasons for this particular phase of the DMAIC model.

In some definitions of the Model, the O stands for Obstacles, but given our application, Options is far more useful.

Here, you will want the coachee to think of as many options for their actions as possible. Do not allow them to automatically go with the first one that comes to their minds. This goes for both the big-picture considerations (how to best structure and conduct the coaching process) and the issues that coaching is addressing.

For instance, when the coaching reaches the part about contingency plans (an integral part of the Control Phase in DMAIC model), encourage them to think of as many options as they can, even if there is a “perfect” one. The mere discussion of different options will do much more for their understanding of the concept than trying to pinpoint that perfect one.

There very rarely is one perfect answer anyway.

The mere discussion of different options will do much more for their understanding of the concept than trying to pinpoint that perfect one.

This part of the model concerns the coachee’s motivation and plan to move forward (you may also find that W stands for “the way forward”). Once the goal is established, the coachee is aware of where they stand and they have options before them, you should discuss how they intend to achieve the objectives.

Your Coaching Practice—Key Mistakes to Avoid

Below are a few key misfires to avoid when coaching Lean Six Sigma:

Michael is the man behind Qeedle, a marketing and business hub aimed at helping small and medium business owners and startups get their hang of the business world.
Poll
Need great pricing for your team?
Get a Quote
[templatera id="117317"]
Copyright GoLeanSixSigma.com - All Rights Reserved
Cart
Search