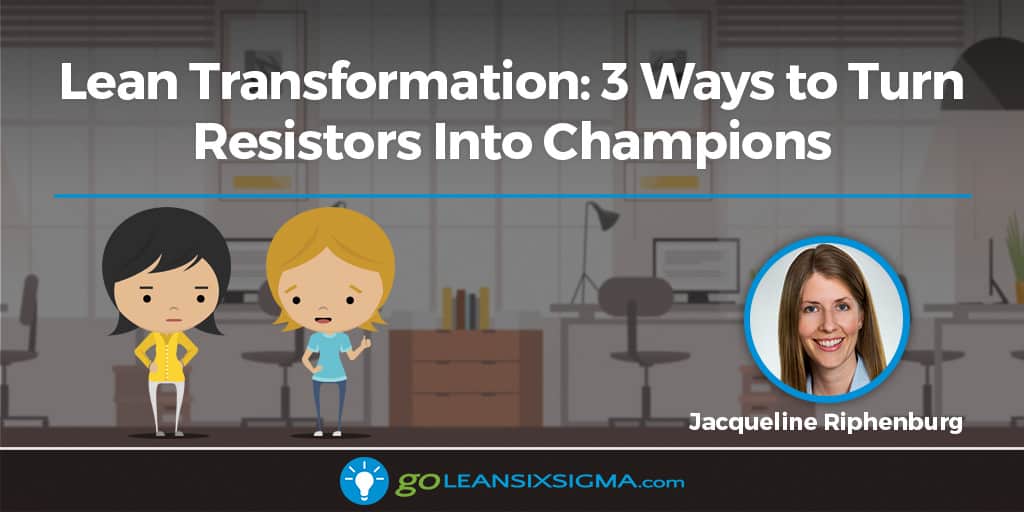 Working through resistance is always one of the most challenging parts of a Lean cultural transformation. It’s difficult and time consuming to understand where each individual falls on a change management curve and their personal motivation for change. However, getting some of your biggest resistors to move forward can result in huge gains, especially at the leadership level.

I often reflect on the amount of time I spend creating a strategic plan to motivate resistive individuals to change, when time could be better spent coaching those who are ready and willing to grow and change. That means having some ready strategies is key.

I was once challenged to coach a leader who had resisted adapting the Lean philosophy for years. We’ll call her “Tori.” Tori had several process improvement coaches before me, and successfully wore each of them down until she was dismissed as part of the 5% who will never change.

She continued to proclaim that she and her team did not find value in many of the Lean tools while simultaneously insisting that they were already Lean experts. Tori provided short, dismissive answers in conversations, making her difficult to coach. It was easy to label her a “resistor” based on her lack of desire to change and overall attitude. Most people would rather focus on coaching individuals who have a desire to be coached.

We all know the time-honored philosophy that you can’t change anyone who doesn’t want to change, but I still enjoy the challenge of identifying the perfect strategy that might transform a resistor into a champion. Below are 3 of my most effective methods for success.

Influence is one of the most powerful change management strategies. The key is to identify the best approach to influence a particular individual or group based on the relationships they value. Influencing can happen upwards, downwards, and sideways. A combination of approaches may be most effective.

The key is to identify the best approach to influence a particular individual or group based on the relationships they value.

The first step is to recognize peer adversaries and confidents of the person you’re trying to influence. Spend time observing your resistive coachee in group settings with their peers. If they have a strong relationship with certain individuals who are Lean champions, reach out to the champions to see how they could potentially influence the resistor. Competition may also motivate people to change. If a resistor’s peers are embracing Lean, you may be able to leverage that in your coaching discussions.

I have also encountered situations where the team supported by the resistive leader was finding value in lean tools and behaviors. In this scenario, find ways to recognize the team for their accomplishments and coach the leader to see them as well. Show the leader how they play a role in helping the team to continue down the path towards better performance.

The final group of influencers to pay attention to is the leader(s) of the resistor. How are these individuals coaching and setting expectations about Lean development with the resistor? If they are currently not, work with them on a plan to do so.

If the resistive coachee does not have clear performance and developmental goals set for them by their leader, they will likely not be motivated to change since their performance is not measured on these goals. Incentivizing desired behaviors is critical to sustainability. Also, take note of whether the leaders are leading using Lean tools and behaviors themselves.

I tried each of these methods in Tori’s scenario. Influence from peers was difficult for this particular individual as her direct peers were not completely bought into the Lean philosophy and Tori tended to keep to herself. Her team had reached a plateau in using certain Lean tools and assumed the rest just didn’t fit their type of work.

Her manager definitely acknowledged Tori’s resistance and was also frustrated by the lack of buy-in he’d seen from her over the years. The manager was open to new change management approaches, but had also labeled her a “resistor”—someone who would never come along. After attempting all the angles of influence, I began to get frustrated, but there were still a few other ideas to try.

It’s challenging to determine what an individual values. Values are deeply rooted beliefs that evolve over a lifetime based on personal experiences and environment. For instance, while one employee may value the 10 minutes per transaction that an improvement has saved them, another employee may only find value in a substantial efficiency savings they can boast about to advance their career.

Although everyone defines value differently, it is hard to argue against the idea that value is defined by the customer. This is one area to try leveraging with anyone not yet bought into the Lean methodology. Find examples from within your organization, if possible, and challenge your resistive coachee to do the same. By looking at value through the lens of the customer, the employee may be more motivated to find ways to improve.

By looking at value through the lens of the customer, the employee may be more motivated to find ways to improve.

Tori was a firm believer that certain Lean tools were not applicable to her team’s line of work. One of these was the concept of “gemba” or “to go see.” Often, leaders are promoted based on their detailed knowledge of the work, as was Tori’s case, and she believed she knew as much, if not more than her staff about the work processes.

I shared with Tori several examples of other organizations that used the gemba and other lean tools to their benefit in a similar line of work. While she acknowledged that it worked for those companies, she still did not see the value it would bring her or her team. This led me to my final strategy of empowering the resistor.

One of my favorite change management strategies is to empower someone who is resistant. Charging resistors with the task of strategically trying to move others along or provide input into the organization’s Lean program shifts the focus away from the resistor taking it personally.

This strategy allows coaches to develop stronger bonds with the individual, assess their thinking, and ultimately have more meaningful conversations about Lean because the resistor doesn’t feel pressured to change. Empowering these individuals can be risky if they fail to produce results, but leads to an opportunity for engagement.

Charging resistors with the task of strategically trying to move others along or provide input into the organization’s Lean program shifts the focus away from the resistor taking it personally.

Empowering Tori to develop and lead the Lean strategy for her entire leadership team was my final attempt to gain Lean buy-in. If it didn’t work, all of the leaders would be impacted and potentially fail to close gaps and achieve their business targets.

But if it did work, Tori would likely be seen as an advocate for Lean and would learn a lot about the benefits in the process. My first step was to run this idea by her manager, who supported it. He also saw how it might connect to one of Tori’s development goals—an added bonus that could potentially create more buy-in.

I was nervous about presenting the idea to Tori. I had convinced myself that there was no way she would be interested. The fact that she accepted my meeting request was a pleasant surprise. When I asked Tori if she would help lead the leadership team towards a higher level of Lean maturity and growth, she was completely on board. I was shocked.

It seemed too easy, and I was skeptical, but she proved me wrong. This new perspective allowed Tori to talk more holistically about flaws she saw in past approaches and why she struggled with some Lean concepts, which ultimately lead to her sharing ideas for experimentation. It also allowed me to see some of the root causes of her years of resistance.

This new perspective allowed [her] to talk more holistically about flaws she saw in past approaches and why she struggled with some Lean concepts, which ultimately lead to her sharing ideas for experimentation.

She lacked a true understanding of Lean systems thinking and was saddled with past assumptions. She began to open up about general management struggles she was having with her team around engagement and she was happy to take my suggestions. She started requesting Lean coaching, and did a thoughtful job of leading the leadership team through discussions and actions to achieve their goals.

While Tori was not a significant influencer among her peers, getting her on board with the Lean methodology did improve morale of the group when it came to discussing their Lean journey. Her new positive attitude and perspective on Lean allowed her peer group to set growth goals together and see quicker progress.

If you think someone falls into the 5% category of individuals who refuse to buy into the Lean methodology, consider these 3 powerful change-management approaches:

It often takes a combination of the 3 techniques before you see success. There is significant value to be gained by finding the right motivation recipe for a resistive leader, and it feels pretty good as a coach too.

Jacqueline has over 10 years of experience leading, training, and coaching teams and executives to achieve operational excellence using Lean Six Sigma principles. She received her MS and BS in Mechanical Engineering from the University of Wisconsin-Madison and is a certified Six Sigma Black Belt and Project Manager.
Poll
Need great pricing for your team?
Get a Quote
[templatera id="117317"]
Copyright GoLeanSixSigma.com - All Rights Reserved
Cart
Search