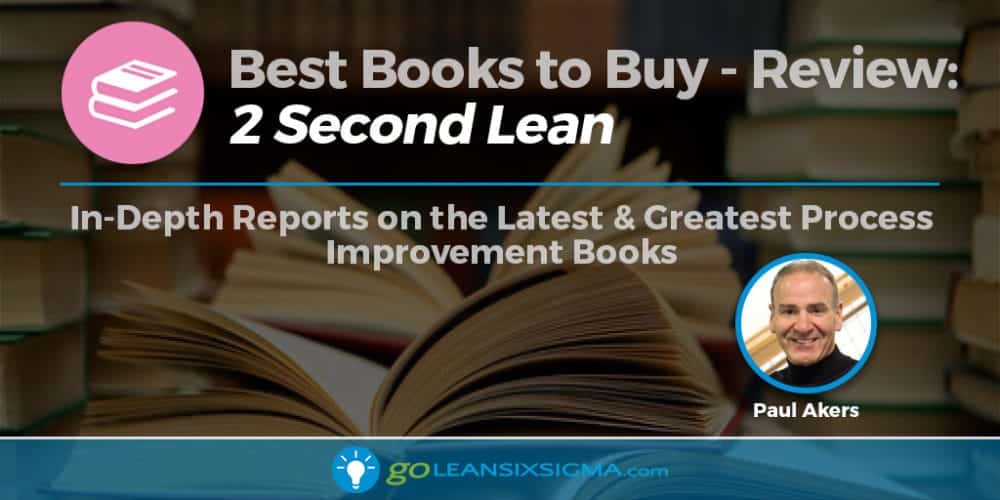 This month’s book is 2 Second Lean: How to Grow People and Build a Fun Lean Culture by Paul Akers. 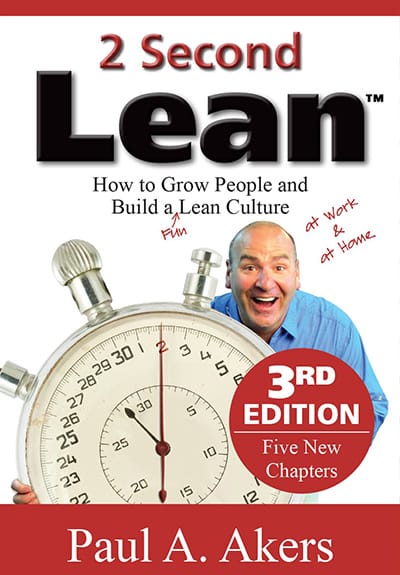 become a grind when we are focused on just the process, instead of the people. This is the point where most people give up on Lean. They are 90% process focused and 10% people focused. It should be 100% the opposite.”

2 Second Lean is a funky little paperback. It’s clearly self-published. The photos have a home-grown look, the paper is glossy and printed on something close to card stock. The graphics are not sleek and there’s a mix of images and fonts. But that’s the point. The book itself is a Lean effort. His list of acknowledgements is short – Paul Akers used the skills he had, inserted the photos he’d collected and wrote in his own voice. But don’t be fooled. At 5.5” x 8.5” and 154 pages, this book punches way above it’s fighting weight.

At first glance, 2 Second Lean appears to be a how-to guide. And it is. There are examples, links to videos, book suggestions, debrief questions – all to help you apply simple Lean techniques to improve a workspace. For those unfamiliar with Paul Akers, he has championed the idea of requiring his workers to make at least one improvement per day that results in time savings of at least 2 seconds. A seemingly modest request. Yes, it’s a how-to guide, but at its heart it’s a joyful travelogue of one man’s journey to becoming an intensely proud and successful Lean leader.

Paul Akers was doing just fine. In his own words, “Everything I had attempted in life up to this point I had not only achieved, but I excelled at.” But when he encountered inventory problems in his new company, he “hired a manufacturing consultant to suggest a software program to manage [his] inventory more efficiently.” I love this example since we hear this all the time, “The problem is a lack of automation,” which is really just a solution masquerading as a problem. Luckily this consultant told him he didn’t “know what he was doing.” And, even luckier, Paul was humble enough to hear that.

From here Paul dove in head first with his young consultants as guides. He read the Toyota Way, he studied Deming and he learned the 8 Wastes. He figured out that producing and storing large quantities of every product was “consuming space, equipment, personnel resources, and money.” He focused on reducing the waste of Inventory, the waste of Motion, the waste of Waiting, but what was key was recognizing early on that the biggest waste was the 8th waste, what he calls, “Unused Employee Genius.”

Bitten by the Lean bug, Paul was not satisfied with tackling the shop floor. He created Lean kitchens and Lean bathrooms. He brought Lean home and rigged up an underground washer for his sit-down mower, a Splenda-Cinnamon “pre-mix” for his tea and a butter “brush” to better coat his toast. He relished saving tens of thousands of steps for himself, his employees, his wife, his kids and, if he had one, probably his dog. But a visit to Toyota brought a stark realization. “I had just spent the last 5 years focusing on waste and continuous improvement. Toyota, on the other hand, was obsessed with building a culture through teaching and training it’s people.”

Paul’s epiphany was one of motivation. He realized he was motivated to apply Lean because it helped him grow his business. His employees, on the other hand, cared about having a “good job, a paycheck, personal satisfaction and a sense of camaraderie with other employees.” Instead of “trying to convince my people to embrace Lean thinking by initiating ‘Lean Events’,” he needed to switch his efforts toward growing his people. Paul’s journey took a crucial turn once he figured out what “growing people” meant for him and his business.

Paul’s journey took a crucial turn once he figured out what “growing people” meant for him and his business.

He instituted a 5-10 minute daily huddle with his employees to review production schedules, assess new processes and give each other suggestions. From there he asked employees to read the same books that helped him (most are listed on our Amazingly Awesome Book List!) and invited them to read sections aloud during these same morning meetings. They expanded the book list, increased the number of topics and morning meetings grew to 45 minutes. Employees became better critical thinkers but they also got a chance to become better leaders as Paul had them trade off leading the meetings themselves.

The journey continued. They added morning improvement walks, they added Lean Tours. And, of course, he instituted the famous, daily 2 Second Lean Improvements. And he had setbacks, but he treated them as new opportunities to learn. He tried instituting incentives where employees were rewarded for their improvements. But that turned into a complicated process that was cumbersome to manage and employees began focusing all their energy on how much money they’d be receiving for each of their improvements.

I’m guessing he read Daniel Pink’s Drive at some point and figured out the short-term success and ultimate failure of incentives, or maybe the sheer annoyance of managing the payments for thousands of improvements drove him to rethink the idea, but what came out of it was his new message to employees, “This is your job.” Improving processes was what he was paying people to do! They weren’t going to get anything extra just for doing their job. The focus was on people using their minds. “Giving incentives takes the emphasis off what the purpose of the company is.” Of course, the fact that the business had become so Lean allowed him to pay his people 30% more than his competitors. And that’s more to the point.

Much of his discovery as a leader centered around how to treat his employees. He invested in training, he focused on their development, he had them lead meetings, he valued their critical thinking skills and these are all expressions of respect. Just as John Guaspari uncovered in his book Otherwise Engaged, leaders respecting employees makes all the difference. Paul explains, “Every human being longs to be respected, but most people never get it.” And the bonus is that once you start listening to your employees you stop shouldering burdens yourself – “you have an ocean of possibilities and ideas just waiting to be tapped.”

The bonus is that once you start listening to your employees you stop shouldering burdens yourself.

Leadership Has to Show Up

He also witnessed failure of leadership in other companies. He describes a company that had been practicing Lean for 3 years but “the culture felt flat.” He discovered that the impetus for Lean was based on the discovery that competitors were doing it. The responsibility for the effort was pushed to mid-level managers while executives “washed their hands of it.” Their only interest in Lean was how it would support “the bottom line” which resulted in an “uninspiring Lean culture.”

Along the way, Paul found his own purpose in the pursuit of helping others enjoy the bounty of becoming Lean thinkers. “Helping others and giving back is more important than making money. Being purpose-driven is more powerful than being profit-driven.” Daniel Pink would agree and the research bears this out. Kelly McGonigal’s The Upside of Stress makes this clear as well. “The most successful companies in the world have balanced the art of making money with the gift of sharing and helping others.”

Paul Akers is the president of FastCap, a growing manufacturing company in Bellingham, Washington that makes innovative woodworking tools and products. A prolific inventor, Paul holds U.S. and International patents. He produces thousands of Lean videos each year and offers Lean Tours of FastCap’s manufacturing facility. FastCap won business of the year in 1999 and 2010. Paul won Business Executive of the Year from the Seattle Business Magazine in 2011. He has never laid off one employee, nor cut one salary and currently offers the highest entry-level pay for any business in the region.

When he’s not at work or home with his wife and two girls he’s off climbing Mt. Whitney, flying his private jet, participating in Ironmans and making tea with Splenda and cinnamon.

Who Should Read 2 Second Lean?

“I always play a little game after completing [a] book. I ask myself, ‘what is the one take-away that will rock my world if I seriously apply it?’”