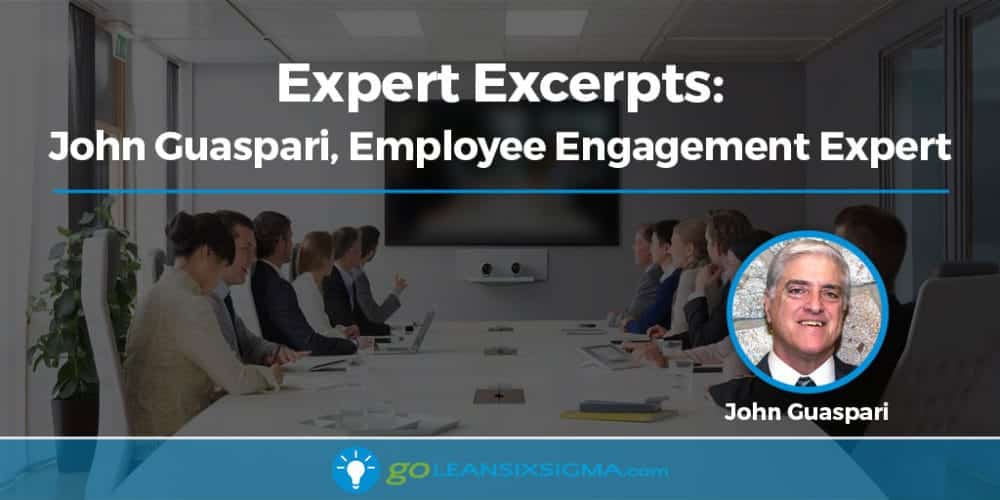 Whether you’re just starting your Lean Six Sigma journey, or you’re in the middle of improving a process, guidance from Experts can help make your efforts easier – and more successful! In this Expert Excerpt, we interview Employee Engagement Expert, John Guaspari, who shares key insights to engagement impacts success with Lean Six Sigma.

For over thirty years, John Guaspari has helped leaders take on the challenge of being more effective at attending to Employee Engagement and the rest of the critical Intangibles — i.e., Empowerment, Trust, Respect — in order to leverage the full potential of their workforce. His latest book, Otherwise Engaged: How Leaders Can Get a Firmer Grip on Employee Engagement and Other Key Intangibles, was selected by Leadership & Management Books as one of “2015’s top 5 Leadership Books.”

What are some common mistakes you see people making when trying to get employees involved in Quality efforts?

The main mistake I see is an error of omission rather than one of commission. The formal pursuit of Quality is about documentable processes and statistical probabilities and the rigorous application of well-proven techniques and protocols. And while all of that is essential to the success of any Quality effort, it’s also only half of the battle.

Getting employees more deeply involved — more truly engaged — in Quality efforts calls for attending to two dimensions: the rational and the emotional. Things need to make sense to people, and all of those processes and probabilities and protocols I just mentioned cover that base thoroughly.

That brings us to the emotional dimension, which I stumbled into when I first got involved in the world of Quality way back in the mid-1980s. I was working for a company that made Automatic Test Equipment. Total Quality Management — TQM — had begun to gain real traction in the electronics industry. One of the tenets of TQM is that if inspection is your primary Quality strategy you will fail; the focus should be on prevention, not inspection. Well, my company made inspection gear, so you didn’t have to be Michael Porter to realize that this TQM stuff might be of strategic significance to us. So I was dispatched to the field for several months to visit customers, suppliers, and even a couple of competitors. And I kept hearing versions of the same question over and over again from CEOs and Presidents and VPS of Manufacturing and Quality: “We know what we need to do from a technical point of view. But how can I get my people to want to do it?”

That’s when it hit me. It wasn’t that what people were doing was wrong. It was that they weren’t effectively addressing the tougher part of the challenge… the emotional dimension… the “want to” factor. It was this error of omission that led me to write my first book, I Know It When I See It: A Modern Fable About Quality. It was my attempt to give leaders a tool they could use… a way to say to their people, “Here’s why all of this quality stuff matters.” The book sold very well. I don’t say that to pat myself on the back. I say it because it suggests that addressing that extra-rational dimension was a real felt-need. Not attending to it is the single biggest mistake that leaders can make, and that’s true regardless of the rubric under which any major change initiative is undertaken — TQM, Lean, Reengineering, you-name-it.

Do you have any pet peeves related to how leaders approach engaging their employees in the Quality realm?

Well, this just got awkward. The way you’ve asked the question is… um… one of my biggest pet peeves. I’ll try to explain without being too argumentative.

Leaders are can-do people. I mean, that’s how they got to be leaders. When they hear that this engagement stuff is a big deal, they think: “I’ve got to do something. I’ve got to engage my people.” So they set up all sorts of mechanisms such as all-hands meetings, regular emails with a broader distribution list, skip-levels, well-publicized open-door office hours, etc., etc., etc.

This seemingly reasonable impulse betrays a mental model that sees engagement as a mechanical challenge — bringing things together, like “gears engaging.”

But engagement, properly understood, means “the extent to which an individual is moved to invest incremental effort and energy in the tasks at hand.” It is, to invoke the language I used earlier, an emotional matter rather than a purely rational one. “Emotional” has the same root as “motive”…the answer to “Why?” It has to do with a person’s spirit fully embracing the challenge, not the boss coming into mechanical contact with an employee. It is something that happens in people’s hearts, not in their heads.

If I’m your boss, I can’t engage you. What I can do is work to create an environment in which you are more likely to become engaged. Note that in this formulation, the engagement is something that happens within you not in the task column of my Engagement Project Spreadsheet.

I know this all sounds very soft and squishy and semantic. But the Quality orthodoxy preaches the importance of having a correct problem statement before moving to solutions. The engagement problem should be stated: “How can I create an environment in which people are more likely to become engaged?” If it’s stated as “How can I engage my people?” you’re trying to solve the wrong problem.

That’s my pet peeve. Sorry for calling it out in the way you framed the question.

What advice do you have for someone that is getting started with the “people side” of Quality?

Much as we might like engagement to be purely a mechanical matter, you should avoid thinking of it that way. It’s easy to create mechanisms to come into more frequent contact with people. It’s hard to understand — and then act on — what will move a person to bring extra effort and energy to the job. Engagement is more a matter of institutional soulcraft than project management. That’s a much more difficult and complex challenge than setting up mechanical connections. Recognizing it as such — i.e., having the right problem statement — is the first step to being more effective at attending to it.

Is there anyone that has significantly influenced you over the years?

As clichéd as it sounds, my father was the biggest influence on me. He was a city official in the Upstate NY city I grew up in and had a fair amount of authority that could affect a lot of people. But he always — always — treated everyone with fairness and respect. It’s an example I try to follow. Unlike my dad, I’m not batting 1.000. Not even close. But it is the goal I strive for.

The relevance of this to what we’ve been discussing here is that you can’t achieve Engagement by making a full-frontal assault on it: “We are now going to drive Engagement levels!” Engagement is an output… the result of other things having been done well. The same is true of Empowerment and Trust and many of the other elusive intangibles we try to manage for.

The one intangible that anyone at any level in any role in any organization has complete control over, though, is the amount of Respect they infuse into the organization throughout the workday, where Respect is defined as: “Giving due consideration to the other.”

So since people tend to like prescriptive advice, here goes: If you want a more highly Engaged workforce, get everyone to focus on infusing Respect, properly understood, in all their interactions.

Why do you do what you do? (What motivates you?)

The way I got started in the consulting business is straightforward enough: I got laid off. The next day I got a phone call: “We read your book and liked it a lot. We need a speaker for an upcoming Quality Day celebration on thus-and-such a date. Are you available?” I took a few moments and pretended that I was looking through my calendar (which, of course, was blank since I had just been laid off), told the caller that I was indeed available, took the speaking gig, and discovered that: a) I was reasonably good at it; and b) I really liked doing it… I liked seeing the light bulb go on for people when they “got it” vis-à-vis all of this soft, squishy stuff about Engagement. So over the course of my 30+ years of consulting I began to realize that I had become, at root, a teacher. The gratification I get from my work is the standard stuff that comes with teaching… helping people gain real understanding about complex stuff. That’s what motivates me.

Do you have any examples of trying to “increase engagement” in your personal life (away from work)?

I go back to what I said earlier about how the only thing that one really has complete control over is the amount of Respect he or she infuses into his/her dealings with other people. Just this past week I got into a small dust-up with two business associates. It was quickly resolved and all is well now. But in reflecting on what had happened, I realized that I hadn’t been as respectful of their point-of-view as I should have been. Had I been, they in turn would have been more inclined to invest in their collaboration with me, i.e., be more engaged.

What would people be surprised to learn about you?

Probably that this guy who’s spent 30-plus years dealing in all this “woo-woo” about Engagement has bachelors and masters degrees in aerospace/mechanical engineering. If you had said to me back when I was a still a young man in my 30s that I would spend the rest of my professional life sailing in those murky waters of emotions and intangibles I would have said that you were — to invoke a not terribly technical or rigorous term — nuts.

How do I reconcile my training in the ultimate rational pursuit — engineering: the solving of real-world problems — with mucking around in all this soft stuff? With this argument: People are less highly engaged — and businesses are, perforce, less successful — because most organizations attack only the rational dimension of engagement. But taking a rational-only approach is in itself irrational. How much sense does it make to ignore what is at least half of the problem you’re trying to solve?

Anyway, that argument works for me. Hope it makes at least some sense to you. Thanks for giving me the opportunity to opine. I’ll now climb down off of my soapbox.

Have a question for John? Please feel free to ask in the comments below.

For over thirty years, John Guaspari has helped leaders take on the challenge of being more effective at attending to Employee Engagement and the rest of the critical Intangibles — i.e., Empowerment, Trust, Respect — in order to leverage the full potential of their workforce. His latest book, "Otherwise Engaged: How Leaders Can Get a Firmer Grip on Employee Engagement and Other Key Intangibles," was selected by Leadership & Management Books as one of “2015’s top 5 Leadership Books.”