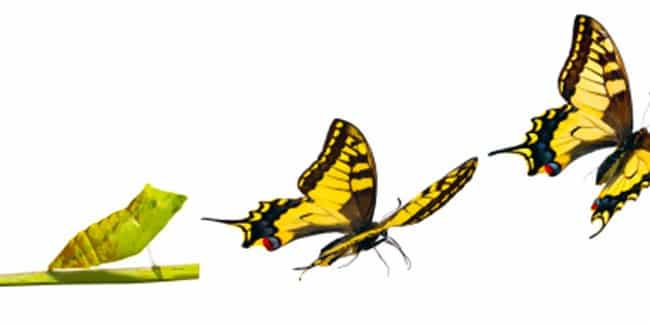 The “To Be” or Future State of the process is a critical component of the Lean methodology and the Value Stream mapping exercise.  It is a powerful exercise that strokes the imagination and helps break free from the current inhibitors of the current state which are contributing to any one of the seven wastes.

Previously, we’ve covered How To Visualize a Process With a Value Stream Map which explained how to map a process in it’s original, or current state before process improvement or Lean Six Sigma is applied to it.

The exercise of mapping the current state, capturing the relevant data in the data boxes and chronicling the 8 Wastes have sparked ideas for the future state in most instances.

Thus, the future state begins with the imagining of the process without the non-value added activities and the elimination of the seven wastes including those in value-added steps.  In an earlier example of a ‘Current State’ value stream map (VSM), we documented the replenishment process for a food manufacturer.  The total cycle time was about 55 hours which made the replenishment process from receipt of the planned load to delivery almost 3 days.  From the current state analysis, the team identified a number of improvements desired in the process.  Working with the IT support group, selected transportation vendors and warehouse staff, the team realized their goal of plan and pick-up within 24 hours was achievable and that improved routing guides in lane management and working with preferred carriers would reduce transit times. 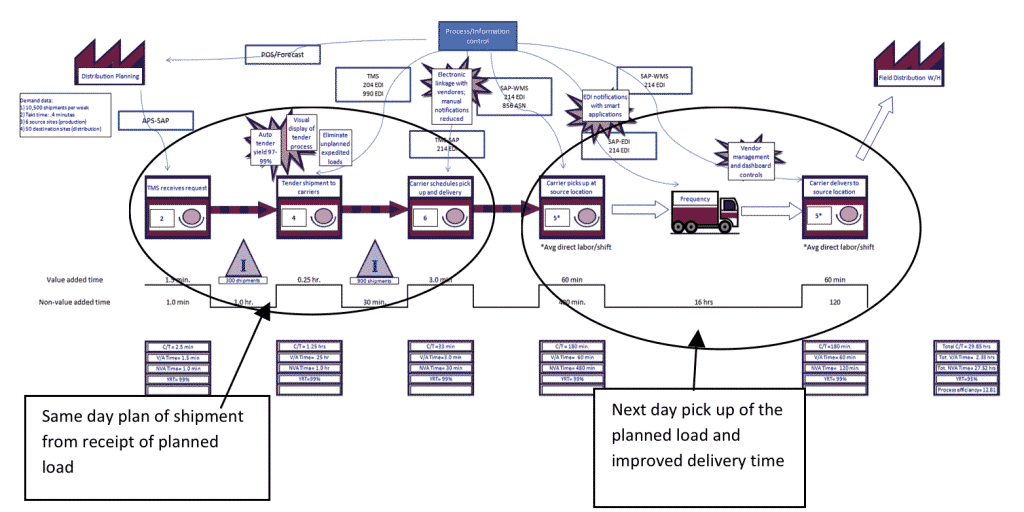 The team created the ‘Future State’ or “To Be” value stream map. The non-value added times were reduced in every step.  The improvements included:

The improved auto-tendering of loads, reliance on preferred carriers  and compliance with routing guides reduced manual interventions and handling reducing FTE staff in the upfront processes.  This actually freed up staff to transfer to the vendor management group which was in need of staff.  Headcount in the planning process on non-value added staff could transfer to value added activities to another group within Transportation.

Overall improvements as envisioned by the Future State included a nearly 50% reduction in cycle time from 55 hours to 29 hours, 4 FTE (full-time employee) reduction in the tender and scheduling process, a yield of at least 95% compared to 63%, and an improved process efficiency from 5% to almost 13%.

The determination of the “how-to” make the improvements happen were scheduled in Kaizen events. Interestingly, the internal IT support group was able to implement improved batch cycling between applications quickly whereas the electronic linkage with the carrier groups would take a longer time due to capital investments incumbent on the external vendor.

Dewey is an Executive Consultant at OT Consulting Group and has consulted and delivered outstanding results to clients in manufacturing and service industries for 16 years using Lean, and Six Sigma Supply Chain deployments in both domestic and international environments. Prior to consulting, he worked in manufacturing industries in quality, productivity and sales capacities.