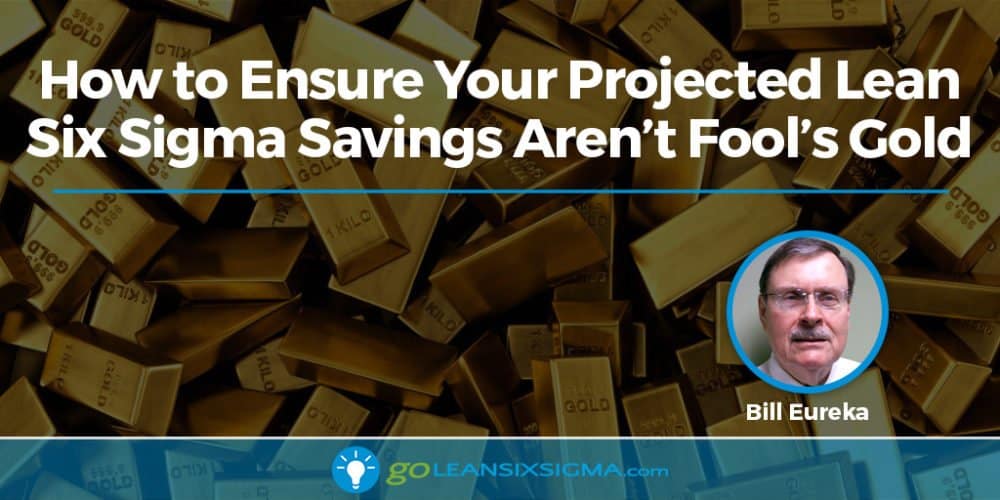 Politicians refer to hard dollars vs. soft dollars often and I don’t pretend to understand what they mean. For one, it has nothing to do with the hard and soft money we deal with in our improvement work. The distinction between hard and soft money can be confusing, but we’ll try to make sense of it here.

What’s the Difference Between Soft Money and Hard Money?

In the context of Lean Six Sigma, hard money is tangible and can be expected to actually hit the bottom line – and soon! If a project delivers $100k in hard money, we can expect the company profit to increase by $100k either in the current or next fiscal year.

Soft money, on the other hand, is either not tangible, or is merely theoretical.

Soft money, on the other hand, is either not tangible, or is merely theoretical. Many companies have established costs for various activities, which many presume to be real. For instance, a company might determine that it costs $100 to process a purchase order. Suppose, through our improvement efforts, we consolidate purchasing requests and have 500 fewer purchase orders each year. That works out to 500 PO’s/yr x $100/PO’s = $50,000/yr. Now, have we truly saved the company $50k annually? Probably not, unless there has been a visible reduction in cost.

Now, suppose we outsourced the purchasing function and the external company charged $100 for each PO processed. In that case, we’d be reducing what we were charged and the savings would be very real – It would be hard money. Simply put, the practical difference between hard money and soft money is whether we can truly see the saving in bottom line profit.

The key question is, “how do we get the money?” If you can’t imagine where the money will come from, chances are it isn’t real, so it’s not hard money.

Let’s take a look at a number of real life situations where the idea was to produce real savings, but they turned out to be a mirage.

A project resulted in the discovery of a large amount of inventory for product that was no longer sold. This led to the write-off of over a million dollars in inventory. Now, reducing obsolete inventory is a good thing, but in this case there were no real savings. In fact, from an accounting standpoint the write-off would appear as an expense, or loss on the Income Statement. Now if the project were to prevent obsolete inventory, there would be a potential savings, but simply cleaning up the inventory would not save any real money.

Companies pay a lot of money to build or rent space, and they often translate those costs into a cost per square foot value. In our Lean efforts we often consolidate a manufacturing cell and free up floor space. If floor space is “worth” $50 per square foot and we free up 200 square feet, then we might be tempted to claim $50/sq ft x 200 sq ft = $1000 savings. There is a value to that floor space, but simply freeing it up won’t harvest any money. Now if we saved enough floor space to leave a building or floor we were leasing, the lease money saved could be a real savings. Or, if we used the freed up space to manufacture additional salable products, it could generate real dollars.

A company with an internal test lab charged departments they served $250/test hour. After obtaining outside quotes, some departments found that they could outsource the testing for much less, and began to do so. The savings they realized looked good for their department budget performance, but actually cost the company as a whole! How? Once the work was outsourced, the test lab simply had less work, so they had less to do. They did not reduce the number of lab technicians, so their costs did not go down. However, the departments who ordered outside testing actually spent real company money for those services, increasing the cost to the entire company. That’s what we like to call, “robbing Peter to pay Paul” and you should always watch out for optimizing a sub-process at the expense of the overall.

That’s what we like to call, “robbing Peter to pay Paul” and you should always watch out for optimizing a sub-process at the expense of the overall.

Many large companies insist that products be assessed for profitability. If a product is not profitable, action must be taken. Sometimes the action taken is to outsource to a supplier who can quote a lower price than the cost to produce internally. That sounds like a great idea, but it is often simply a delusion. Many companies will determine product cost based on what is known as Full Costing. This produces a cost value that cannot be properly compared to a supplier price quote. A full cost value is the sum of material + labor + overhead. When we outsource, we no longer pay for the material, and should not be paying for labor, but the overhead costs remain within our company. In truth, some of the labor cost may remain because companies may be reluctant to let go of all of the freed up workers. In order for outsourcing to be truly cost effective, the price charged needs to be less than the company’s Variable Cost (material + labor). That doesn’t often happen because suppliers have their own overheads to cover, which becomes part of the price.

A company was planning to manufacture a new product. The Product Manager wanted to keep the product cost down, and discovered that there was space available in one of their existing warehouses. The warehouse overhead charge per square foot was much less than that in the factories, so the manufacturing was set up in the warehouse. As a result, the calculated product cost was less than if built in a factory. This attracted the attention of other Product Managers, who did the same. After more manufacturing moved into the warehouse there was a need to upgrade the infrastructure by adding more electrical and compressed air capacity, and soon the overhead charge increased to match that of factories. It turned out that the existing overhead rates were simply fictional charges to account for past expenses, but the new infrastructure cost real dollars!

A project to reduce inventory adjustments in a large company was expected to result in a 12 person headcount reduction. When Lean efforts project savings in terms of headcount, the guarantee is that the employees will be transferred to other value adding tasks or the resulting reduction in staff will to happen through attrition. It’s important to point out that it’s a mistake to make headcount reduction the goal of any Lean effort or to fire people as a result of the improvement, since no one would work on another Lean project once that happened!

100 people will be less busy, or will find something else to do with their time, but there would be no real savings!

But in this case, the jobs were never an issue. As we got into the details we discovered that the supposed headcount reduction was the sum of a few hours/week reduction in workload across more than 100 people. Let’s get real! If 100 people had five hours less work each week, would there be any fewer staff? Would any of those people be moved to another process Probably not! More likely 100 people will be less busy, or will find something else to do with their time, but there would be no real savings! Now this could become hard money if there was some consolidation of assignments that did result in attrition, or if the lower workload resulted in a reduction in paid overtime.

“There’s Gold in Them Thar Hills!”

Ok, so how do we avoid the Fool’s Gold and get to the real thing? A major obstacle is the complexity of our accounting system. Instead of trying to explain how accounting works, I’m going to offer ways to think differently about accounting. I suggest that you consider one of the following two approaches: The Work at Home model or Throughput Accounting.

Work at Home: Think about the process you are seeking to improve as if it were happening right in your home. If it is a physical process, think about it happening in your garage – if a transactional process, think about it happening at your kitchen table. You’ll have to scale it down for any of this to make sense of course. Furthermore, think of all of the costs coming directly out of your wallet, and all of the money coming in going directly into your wallet. The key question is, if we make the intended improvement, will we have more money in our wallet afterward or less? The key is, for the improvement to be real (hard) dollars, there has to be some real “greenbacks” showing up, not just on a report somewhere.

Throughput Accounting: This comes from Eli Goldratt’s Theory of Constraints and doesn’t require a change our accounting system – only how we think about it. Goldratt divides all money into three categories: T is for Throughput and is the money taken in for selling (not just making) products or services. I is for Inventory which is the money spent to buy things you will convert into throughput. OE is for Operating Expense, which is all the other money you spend to keep the business running (labor, buildings, etc.).

The key is impacting what you will spend in the future, regardless of the past.

If the change you are contemplating will increase throughput, or decrease money you spend on inventory or operating expense, it is probably real (hard) dollars, so long as there are not additional offsetting losses.

The key is impacting what you will spend in the future, regardless of the past. What you spent in the past is history and gone forever!

Two other considerations are timeliness and the entire enterprise. We normally expect real savings to happen soon – certainly within the a year – but next week is even better. Furthermore, we must consider the impact on the entire company – an improvement in one place at the expense of another has to be carefully deliberated.

It is important to keep in mind that Level 2 benefits might not actually happen, because during the delay circumstances might change, so some companies will not even recognize them as real.

The bottom line is that if the savings are real (hard money), they will appear on bottom line (net profit).

Have you ever realized that the money in your pocket was just Fool’s Gold before? Hope not! We want to hear your hard money stories in the comments below!