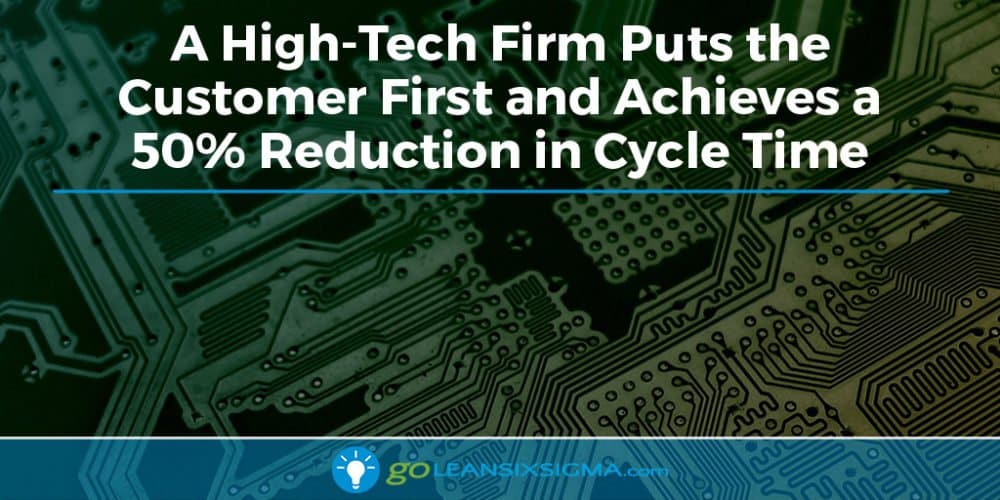 It’s not uncommon for high-tech firms to have a lock on the technologies that enable them to accelerate the velocity of business. However these same companies often find themselves seriously deficient in handling transactional items and service. The growth rates experienced in the upward arch of their technological growth often leave basic transactions and delivery systems lacking.

This is especially true from the customer’s perspective. The most basic of customer satisfiers, such as on-time delivery, prompt call center call backs, accurate and timely invoicing and cash collection become the critical points for process improvement.

One client had a particular problem with funneling leads from its call center to its sales staff. Many leads ended up lost or forgotten. This created tremendous customer dissatisfaction, significant revenue loss losses, and plenty of internal finger pointing.

To reduce cycle time and the “fallout” of leads between the call center and the sales force, recapturing revenue, customer loyalty, plus creating some peace among employees.

Since the scope of the work involved more than one functional area, the team had to spend some time collaborating around the process involved in the sales lead handoff. Also, there would be the potential for some substantial changes in the process, prompting the team to start laying a good foundation for change management. We polished off the right tools from our Customer First toolkit and got to work.

Next came the quest for data. The team had a pretty good idea of the high-level problem, but understanding the causal factors behind the delays would require some good information on the numbers of calls being received, the time those calls came in, when and how they got handed off, and when the return call to the customer was finally made.

Three things became strikingly clear. First, an arcane, convoluted system routed leads to account managers based on types of business, the geography involved and the potential dollar volume of the deal. Secondly, some of the non- system policies involving sales people and their behaviors with respect to the leads, proved inconsistent. In some cases a sales call to the center would not be returned by a sales person until some six or seven business days had passed. Of these late calls, nearly half resulted in the customer ultimately contacting competitors.

The team brainstormed potential solutions around the three key problem areas: routing of leads, the business rules behind those routings, and the behavioral aspect of the account managers.

Looking at the routing of leads through some very simplified process maps and a “value-add” exercise quickly revealed where the leads stalled. A streamlining of that process lead to a dramatic reduction in wait time.

Next, a review of the business rules revealed a Byzantine collection of rules that had been amassed over years of “kludged” business practices. An analysis of the rules revealed they could be boiled down to about seven key items. Once streamlined, the cycle time took another drop.

Finally, some key interviews and analysis with the account managers revealed that they simply never got around to completing some important tasks. Account managers would fail to update their profiles, leading to slow, misrouting of key information.

The team therefore set a goal of engaging sales management to reinforce the policies. They also lead a series of mini-training sessions to make sure sales teams had been properly instructed on how to handle their profiles, and leads.

Once the team attached a basic “value” of about $3,500 per lead, the math, and the benefit, became very clear. Plus the improvement also leads to sales staffers being much happier about getting the right lead for them and the right time.

A more than 50% reduction of cycle time paid off handsomely with a recapturing of hundreds of leads each month. Once the team attached a basic “value” of about $3,500 per lead, the math, and the benefit, became very clear. Plus the improvement also leads to sales staffers being much happier about getting the right lead for them and the right time.

Creating a good customer-centric process is key to gaining market share and growing your business. In a sophisticated business with many moving parts, the right solution is not always clear. Often, the solution you create is only treating a symptom, and not the real root cause. A carefully executed Customer First plan can help you zero in on those things impacting your customers’ experience.

Ernie Arboles is a Senior Consultant at GoLeanSixSigma.com with nearly 30 years of experience launching and sustaining successful continuous improvement programs inside Fortune 500 companies. He’s an experienced project manager, trainer, coach, and facilitator, able to earn trusted-advisor status with senior leaders and on to smallest but mightiest project teams in any organization.