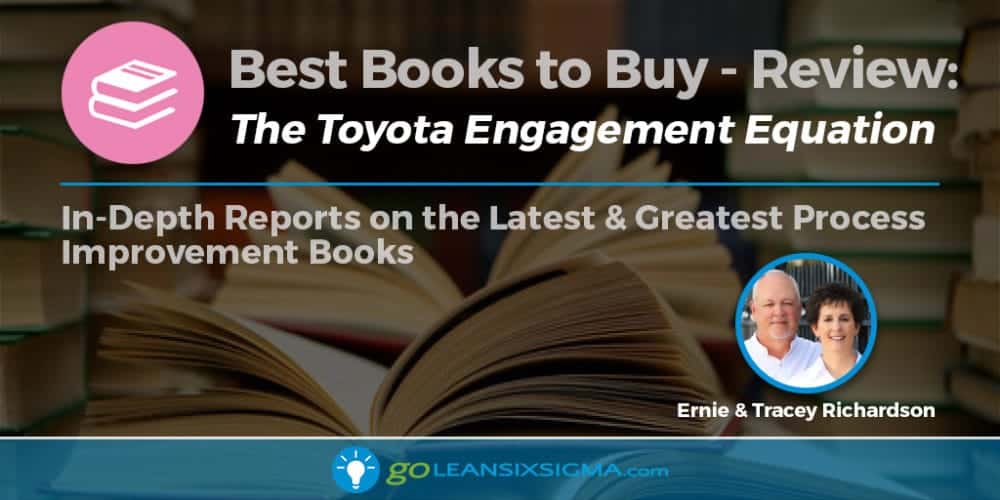 This month’s book is The Toyota Engagement Equation: How to Understand and Implement Continuous Improvement Thinking in Any Organization by Tracey & Ernie Richardson. 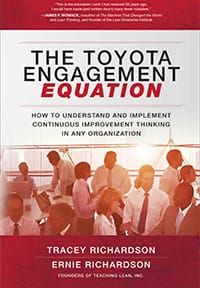 “We were literally homegrown in Toyota’s Japanese way of thinking, taught by trainers who could barely speak English. There wasn’t much theory – just some simple but very powerful ideas, supported with lots of action-based and example-based learning. This wasn’t about Lean or any particular methodology – it was about how to be successful at our jobs.”

This is a book about how to build cars really fast, how to solve problems, how to lead others but mainly, how to think. It’s an entire ecosystem that is, by definition, foreign. Most people are familiar with the notion that Toyota’s production system (TPS) is the secret sauce that made them the most profitable automobile maker in the world, but this is a rare look into that system as it was recreated for the first time on American soil. It turns out that profits were not the goal — of course they were confirmation and a really, really nice side benefit!

A New Way of Thinking

Tracey and Ernie Richardson were young when they met up with the hiring managers of the Kentucky production plant — Tracey was just 18. To help teach these American hires, Toyota supplied rotating teams of Japanese teachers. They mentored, instructed, allowed them to fail, encouraged them to practice and then left before they could soak up too much American culture.

This is the Richardsons’ story of how they absorbed The Toyota Production System, became leaders themselves, relabeled TPS the “Thinking People System” and brought it into the world around them. It’s a blend of their memories and what they did with what they learned. It’s also filtered throughout with learnings and reflections from early managers, John Shook of the Lean Enterprise Institute, VPs of Toyota Plants and Managers of the companies where Tracey and Ernie became, in turn, consultants, coaches and mentors.

Selling, Telling and Convincing Are Out

The most pronounced method throughout the book is Socratic. They start with “why.” Early on in her job, Tracey’s mentor tells her, “…you are a contributor to our Plastics Team, which ensures our Assembly shop internal customer has all their expectations met. We need your contribution, so we can set the stage for the external customer to have a smile.” Her sense of pride in her efforts is palpable — she happily pictures her signature inside the thousands of Camry’s she’s helped to put on the road.

The most pronounced method throughout the book is Socratic. They start with “why.”

Tracey and Ernie learned by doing. Their success as consultants shows how deeply they absorbed and embodied what their “senseis” taught them. It’s a journey rich with humbling moments — “trainers would sometimes let me go down a rabbit hole and fail just to bring a learning point to the forefront” — and unexpected epiphanies. The consistent message was that people are what matter. Not just the smiling customers but every single employee at every level. The application at the Kentucky plant is specific to that plant and that time, but there’s a lot the Average Josephine can take to heart.

The consistent message was that people are what matter. Not just the smiling customers but every single employee at every level.

“I Work For You” Mentality of Leaders

Leaders were tasked with making themselves replaceable. Not the first thing that comes to mind when laboring to become the best at what you do, but it was a fundamental Toyota strategy to ensure employees thrived. Their attitude was that if you were not setting your people up to grow and master new skills, then they would become frustrated and stagnate.

This “Servant-Leader” approach meant leaders were leading and learning at the same time. A comment from Fran Vesica, a Project Manager from the Education Sector sums this up nicely: “Being a servant leader is not having all the answers, but it is about asking all the right questions.” Leaders should be learning and improving their thinking while developing those who report to them. In contrast, the unspoken fabric of most organizations requires management to always know more than their direct reports — and act like it.

Leaders should be learning and improving their thinking while developing those who report to them.

Toyota was never satisfied with how they were doing. Being best was not good enough because “their greatest fear was something they called, ‘big company disease,’ which is really apathy.” That meant they had to constantly raise the bar. At a process level, that meant establishing a standard and then immediately setting a new target and working to create a better standard. At a leadership level that meant as soon as you were comfortable in your job, you’d be promoted or transferred into a position that would be a challenge for you. The mantra was to “always be uncomfortable.”

Part of internalizing their experience was coming up with their own approach. The titular equation refers to their take on the underlying elements of a successful, problem-solving culture which they boil down to:

Unpacking this reveals the two pillars of Toyota culture — Discipline and Accountability — which accounts for the “DNA.” GTS6 represents acronyms for the 6 elements of problem solving:

And the last piece, E3, refers to “Everyone, Everyday Engaged.” Basically, people come first and all teaching, mentoring and improvements revolve around developing employees and leaders. Everyone is judged on their ability to help others succeed. Again, contrast that with cultures in which people “manage up” and work to secure their own career paths as opposed to helping those around them. Not that these sound like cushy jobs.

People come first and all teaching, mentoring and improvements revolve around developing employees and leaders.

There’s a chapter on each element providing examples, guidance and depth but below are some thoughts that stood out:

The Path to a Thinking Culture

Most of the people reading books about Toyota today don’t make cars. At this point, most are not even in manufacturing. So what’s interesting is not how they removed enough waste to get 8 more cars off the line a day, but what led to a culture that enabled continuous breakthroughs. This book is rich with guidance for both continuous improvement methods and how to build a culture of “thinking” problem solvers.

The paradox for most people writing about Toyota’s special “system” is that the originator, Taiichi Ohno, felt that writing it down would kill it. Lean thought leaders and authors, like John Shook and Jeff Liker, acknowledge that since we learn from books, we have to compromise. What’s key in the “compromise,” and clear in this book, is that you learn not by reading, but by doing. “Of course, nobody can ‘teach’ wisdom — all you can do is guide people as they acquire it, often through practice, direct observation, reflection, and the process of trial and error.” Time to get to work!

Tracey Richardson has over 29 years combined experience in different roles within Toyota and learned lean practices as a group leader at Toyota Motor Manufacturing Kentucky from 1988-1998. She was one of the first team members hired and learned directly from Japanese trainers.

As president of Teaching Lean, Inc. for the last 19 years, Tracey has worked with Toyota North American plants, and other companies on their lean journeys, helping them develop the capabilities of employees, including team members and company leaders. Using problem-solving and aligning daily activities with company business plans, she helps them create lean cultures that are the foundations for long-term sustainability.

Tracey is a faculty member of the Lean Enterprise Institute as well as an active coach and contributor to their Lean Post.

Ernie Richardson has 25 years of Manufacturing and Human Resources management experience which allows him to see the cultural dynamics from both functional areas of a company. He gained this experience at Toyota Motor Manufacturing where he grew from Team Leader, to Group Leader, to Assistant Manager on the manufacturing side. He then moved to HR with responsibility for skill development programs, safety and medical management.

As Acting Medical Director for Toyota Engineering and Manufacturing North America, Ernie was responsible for nine on-site medical clinics across Toyota North America (convenience care, full-primary care, and occupational care). He was also responsible for disability management (as described above) throughout North America. Ernie worked at IBM for 8 years before joining Toyota. Currently, Ernie shares his extensive experience with members of the lean community as a co-owner of Teaching Lean and a Faculty member of the Lean Enterprise Institute.

Who Should Read The Toyota Engagement Equation?

“Many will disagree, bet we believe that ‘fixing things’ is not the way to go about Lean. It really needs to start from a genuine desire to change.”