In 2011, Los Angeles County’s Registrar-Recorder/County Clerk, Dean C. Logan, had a vision of his department becoming a leader in customer service. He chose to use the methodology of Lean Six Sigma to help make that vision a reality. A six member team was formed and given the green light to look at one process in each of its four Bureaus.

With the guidance of Lean Six Sigma consultant, Tracy O’Rourke, the team, along with line staff from each operation, eliminated unnecessary steps, reduced wait time for customers and provided a cost savings to the department. An added benefit from these improvements was watching how line staff proudly took ownership of their part of the operation. News that the staff had a input on what changes were made lit a spark that spread like fire among dry brush. Supervisors like Darla Neal, of the Business Filing and Registration section, took the initiative to request the support the Lean Six Sigma team to improve processes in her section. We will take a look at how she was able to answer the call for change.

What the Registrar-Recorder/County Clerk Does

Los Angeles County services its 9.8 million residents in many ways and its leaders are constantly stressing their vision of providing excellent customer service. The Registrar-Recorder/County Clerk (RR/CC) is one of 37 departments in the County. It is responsible for conducting various elections, providing birth, death & marriage certificates, real estate records, business filings and voter registration applications. Each year the office conducts approximately 200 elections for schools, cities and special districts for the 4.1 million registered voters in the county.

The RR/CC also issues approximately 75,000 marriage licenses, 2 million real and personal property documents, 750,000 birth, death and marriage records, and processes 125,000 fictitious business name filings annually and services approximately 2,000 customers on a daily basis. Department Head, Dean C. Logan, prides himself in staying in line with the County’s vision. He has developed a mission statement for the Department: “Serving Los Angeles County by providing essential records management and election services in a fair, accessible and transparent manner.” With this in mind, in March 2011, Mr. Logan sought out a reputable process improvement program that could assist the department in improving their processes which in turn would improve customer service. Six staff members, from different operations of the department were chosen to train and become certified in the Lean Six Sigma (Lean Six Sigma) approach.

As a part of the training process, the Lean Six Sigma students were required to choose a project that they would like to improve. At Mr. Logan’s suggestion, the team members focused on four real operations within the department. Once the certification process was complete, the Lean Six Sigma team returned to the department eager to get started. After hosting a Lean Six Sigma introductory session for management staff, the team members, along with the Lean Six Sigma consultant was now ready to tackle an actual program. It is important to always include management in your introductory meeting. You need their buy-in in order to make this improvement process work. You also want to emphasize that the Lean Six Sigma team will work hand in hand with the line staff to come up with suggestions but will not act until they have given the go ahead.

The process improvement successes from the initial four projects received not only internal recognition but external as well. By eliminating unnecessary steps and reducing processing time, The Vital Records Mail Processing Unit and Lean Six Sigma team received Stars Award. This is a prestigious honor given by The Los Angeles County Board of Supervisors. As the idea of process improvement started to spread in the department, Section Heads like Darla Neal began to look at their own unit and how their operation could be improved upon. Ms. Neal supervises the Business Filing and Registration (BFR) section. What is BFR you might ask, well within 40 days of starting a business in Los Angeles County, it is the responsibility of the business owner to register and file their fictitious business name with BFR.

The supervisor noticed that approximately 55% of the applications received in a week were being rejected.

It is then the responsibility of the BFR clerk to ensure that all paper work related to filing is properly completed and legally bonded under the Business and Professions Code. The supervisor noticed that approximately 55% of the applications received in a week were being rejected. These rejections had to be mailed back to the customer, at the expense of the department, and re-filed, causing the customer a loss of time. Just think of all the time and cost lost with the department receiving about 125, 000 applications per year. Although many Lean Six Sigma projects begin with trying to identify the problem by conducting a GEMBA walk, the Japanese term for “walking the process,” that was not necessary in this case. The supervisor knew that the problem was “too many rejections” but needed help in finding the solution.

Getting to the Root of the Problem

When the problem is already known you can move directly to discovering its root causes. To get to the root cause of the numerous rejected applications, the team conducted what is known in the Lean Six Sigma world as a Kaizen Event. Kaizen is another Japanese term that allows you to tackle specific, focused problems and barriers. This involves a team of people who either work in the area where the problem exists, or who are directly or indirectly affected by the activities in that area, this was the BFR staff. The work group was formed; it included the Lean Six Sigma team, the immediate supervisor and five line staff, one from each part of the operation.

By having each area represented all bases could be covered and input could be received from every aspect. A two day session was held in order to look at all facets of the “rejection” process and the brainstorming began. During the Kaizen brainstorming event the full team came together and started listing what they believed to be some of the factors that caused an application to be rejected. Keep in mind that at this point the Lean Six Sigma team were basically there to lead and guide the session, it was the line staff that were encouraged to give their opinions without any accusations or blame. This is key to having the participants feel comfortable and safe to share all their thoughts, there must be a “blame free” environment. When trying to get to the root causes of a problem a Fishbone Diagram is a great process map to create (see chart below). 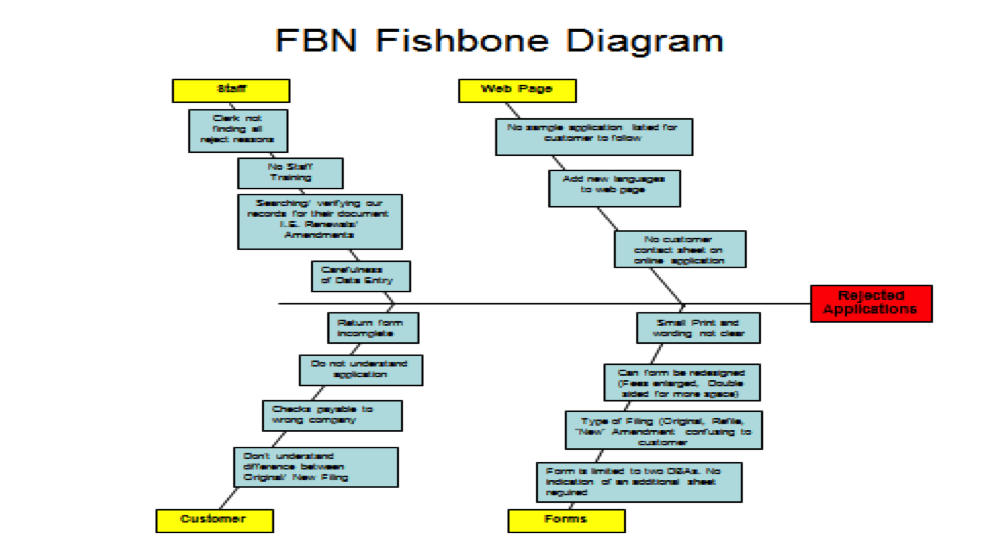 As you can see, the diagram actually looks like the bones of a fish. The fish head is what stinks, this is the problem or the undesirable effect or in our case the “rejected application.” The four ends of the bone were identified, administrative and customer issues, the actual form and the web site. These four tips are what the line staff considered as the main contributors to the problem. Once the bones are established you can then begin adding the smaller bones (errors) that are associated with the main tip. What worked best for our team was to break the line staff up into four groups with a Lean Six Sigma team member in each group, each group focused on the issues involving one bone. Once all the contributing factors were listed, we then began to discuss what issues could be attacked immediately and which ones would take more time and research to resolve. Because the “rejected application” process had so many suspected contributing factors, the Lean Six Sigma team recognized that they needed to start by “Shrinking the Change.”

We knew that a succession of small changes could lead to a big change. The issues that could be addressed and corrected immediately are called “Quick, Quick Hits.” Then there are the Quick Hits, these might take a little longer to fix or have other contributing factors attached. Next are the Long Term Action Items, these can sometimes require legal action or can be looked at again after some of the other changes have been made and have a ripple effect on the long term item or they might somehow be linked to the quick hit and eventually be changed. Keep in mind that any suggested change should be reviewed by management. They are the ones to give approval and would know if any of the changes would affect policy or service to the customer.

In the case of the “rejected application” the line staff identified 9 reasons that an application might be rejected. Each team member took one or two issues, along with a Lean Six Sigma team member, and set out to find a solution. Anyone from the line staff that is willing can lead the project, just remember to keep a record of the dates when an action item is completed (see chart below).

When you begin to discuss each issue in more detail you will begin to notice that not everything listed can be changed, some processes are there for a reason. It could be a legal matter or maybe even an administrative policy. Whatever the case don’t get discouraged, work on the issue that you can change and count that as a victory. Start with the small goals and celebrate them. We looked at the most common errors that were being made by the customer and determined that it was the application itself that was not clear in what was needed. Could it be that something as simple as revising the application could reduce the 55% rejection rate? Once the application underwent an extreme makeover, to our surprise, the error rate immediately dropped to 25%!

Once the application underwent an extreme makeover, to our surprise, the error rate immediately dropped to 25%!

After speaking with the customer, we found that a few more revisions could be made to make the application more user friendly. To date, the rejection rate is now down to 5%. With the tools of the Lean Six Sigma methodology in hand, Ms. Neal took the initiative to improve her processes and won. She is a prime example of what Six Sigma defines as the “Engaged Employee.” These are employees that:

This is Ms. Neal. In January 2013, the BF&R and Lean Six Sigma team were recognized by the Board of Supervisors with a L.A. County Stars Award. Ms. Neal and her staff continue to look at opportunities for improvement within their section.

Recently Mr. Logan held his annual “State of the Department” meeting, this is when he shares the top departmental accomplishments that have transpired over the past year. The theme was “Over the Top!” He challenged us all by stating “what you do well you can always do better.” When I heard this statement I thought of Darla Neal, she could have easily been complacent with the way operations were going in her section, but she took the initiative to make change for the better.

Adaptability is about new innovations and greater efficiencies – and it requires us to be open to new ideas and input.

Mr. Logan also stated, “Adaptability is about new innovations and greater efficiencies – and it requires us to be open to new ideas and input.” Had Ms. Neal’s staff been closed minded, they would have missed out on an opportunity to make a difference in their operation. One good thing to remember is that anyone in the organization can answer the call to change; it doesn’t have to be the Lean Six Sigma team or upper management, all it takes is a desire to make things better.