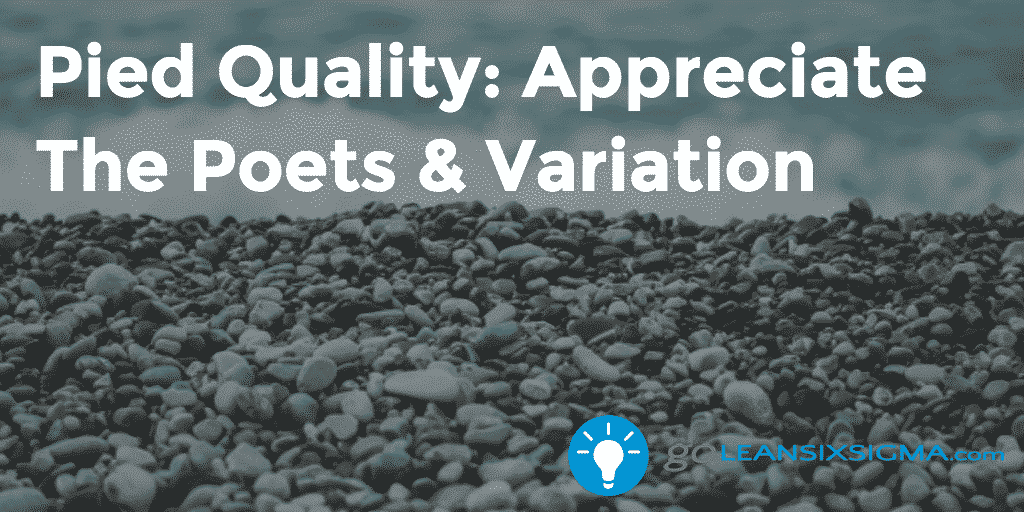 In this 3-part blog series titled Pied Quality, Kurt Stuke (Quality Manager at Adecco) shakes up the traditional perspective on quality and inspires us to approach improvement in an exciting new way.

If your local quality department were to host a party, it is a safe bet that variation would not be on the guest list. Given that quality practitioners organizational “purpose-in-life” is to eliminate or to minimize variation, the exclusion of variation from the “party” is understandable.

Our approach and passion is further inculturated in and through our daily chores. We employ statistics and utilize statistical based methods in order to first identify and then control variation. We erect quality management systems in order to manage variation. We execute audits and drafting findings to combat variation. Lean practitioners extol the virtues of standardization and censure the inefficiency that flows from variation (among other causes). Clearly, we do not care for variation!

Strangely, our passion is not shared universally. Consider the poets. In Pied Beauty, for example, Gerard Manley Hopkins lauded “dappled things” and “skies of couple-colour as a brinded cow.”1 Hopkins’ vocabulary is daunting but, like a well-designed Design of Experiment (DOE), the meanings are accessible. The adjective “pied” is frequently associated with the story of the “pied piper.” The piper was “pied” in that his attire was made of many different materials and consisted of many colors. Dappled and brinded are adjectives and, like pied, refer to a whole that is replete with variation. A brinded cow, for example, has a coat of contrasting markings and colors.

Variation, as framed through Hopkins’ poem, should be first on any guest list because variation inspires us.

With an efficiency that would be admired by any Lean practitioner, Hopkins has employed a terse economy of words to offer a contrary accounting, or, to paint a different picture, concerning the importance of variation. Variation, as framed through Hopkins’ poem, should be first on any guest list because variation inspires us. We, like Hopkins, do not hope for a singularity of color at sunset but desire a glorious mix of color, pattern, and intensity. We long for variation in this instance because we are somehow nourished by the beauty and wonder that flows through and from the variation present.

The Vitality Of Variation

The vitality of variation, its power to lift us, may also be observed among the differences visible in “finches’ wings.”2 These differences may be glimpsed only when the wings are spread or the finches move artfully in the air above us. Landscapes, in their “plotted and pieced” appearances, afford us a window, first into the beauty of variation and then into the nourishment that will spring from the earth below us.

When admitted, variation can, at times, inspire us and act as the seed of innovation.

While we might not agree with Hopkins concerning the power and vitality of variation, the persistence of variation is undeniable. Variation is a “something,” to quote Robert Frost, “that does not love a wall.”3 It creeps in and like a “frozen-ground-swell” causes our plans, our walls, to “spill like upper boulders in the sun.”4Poetic waxing aside, variation can introduce regulatory exposure, impede yields, and even lead to catastrophic failures. The potential risk associated with variation ranges from loss of product through loss of money and may potentially result in the loss of life. But, in other instances, Quality itself might be mended by not “wear[ing] our fingers rough” and “sett[ing] the wall between” variation and quality. When admitted, variation can, at times, inspire us and act as the seed of innovation. As in the beauty of a sunset, variation can be a blaze towards an emerging future-state. The next post will explore the possibility of leveraging variation’s vitality while still adequately managing risk.

How do you control variation? Are you able to appreciate variation? We want to know what you think! Tell us in the comments below.

Read Part 2 of 3 of Pied Quality: Pressed By Time For Time.

Kurt Stuke is a quality manager for AdeccoUSA and a Lean Six Sigma Black Belt. He holds a doctorate in leadership as well as master degrees in philosophy and theology.
Poll
Need great pricing for your team?
Get a Quote
[templatera id="117317"]
Copyright GoLeanSixSigma.com - All Rights Reserved
Cart
Search