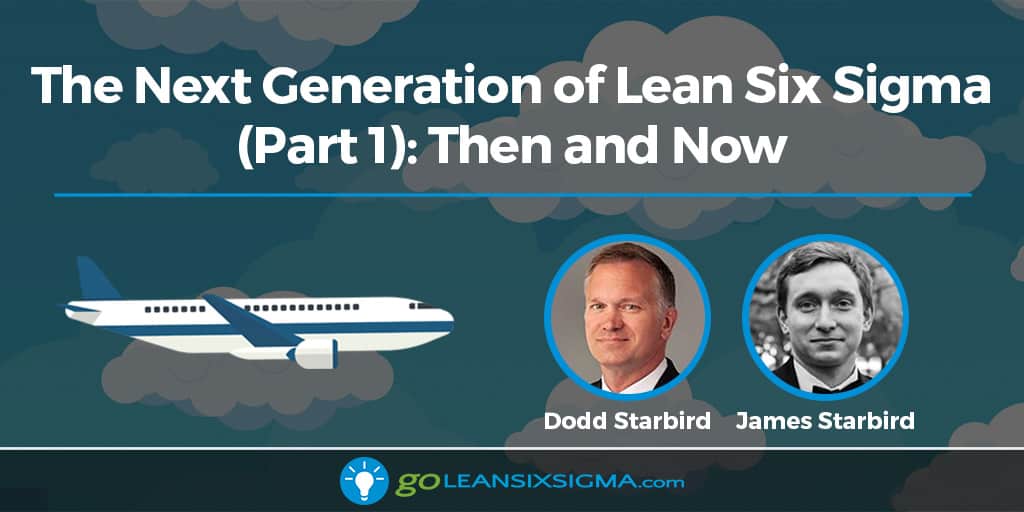 Process improvement has changed dramatically over the last 20 years—but how? For one, there are generational shifts in the practitioners. We’ll provide a glimpse of those shifts through the eyes of two certified Black Belts—Dodd Starbird and James Starbird—who also happen to be father and son.

Today, Dodd and James are colleagues at Implementation Partners LLC, a consulting company that blends classic process improvement techniques with newer tools to help clients build Engaged Team Performance (ETP). Dodd Starbird is a certified Master Black Belt and did his Black Belt Training “before it was cool” in 2000. James Starbird received his Black Belt Certification from GoLeanSixSigma.com in 2017 (definitely cool).

The Path of Improvement

Right now, they’re sitting across from each other in an exit row on their flight home. They’re dodging the food cart as they pass the computer back and forth across the aisle and take turns discussing today’s topic, Lean Six Sigma, Then and Now.

James: When I think about the evolution of process improvement, a lot has probably changed since the inception of Lean Six Sigma. From the early heydays at Motorola, Toyota, and General Electric (GE) to its even earlier foundations in Total Quality Management (TQM), I think many of the founders would be impressed with how the concepts have progressed. Would the early practitioners even recognize the principles they helped create?

Dodd: Probably. A lot of the tools had common foundations. A lot of things are the same—for example, you and I went through similar training. In fact, the materials we use today look a lot nicer and are delivered more succinctly and with better technology, but the concepts are fundamentally similar.

That’s a testament to the staying power and value of the Lean Six Sigma tools and approach. The world has changed a lot in the past 20 years while business problems really haven’t changed much. We still experience defects with unknown root causes, we still have inefficient processes a lot of waste, and we still run up against human organizations that resist change. All the same!

That’s a testament to the staying power and value of the Lean Six Sigma tools and approach. The world has changed a lot in the past 20 years while business problems really haven’t changed much.

The Versions and Clients of Lean Six Sigma

James: You sound pretty sure of that, but I seem to recall that Lean Six Sigma didn’t even exist back in the day, right? Didn’t you get your original Lean training and your Six Sigma belts in different places?

Dodd: True. The concepts were potentially aligned, but they were treated separately. We did a home-grown version of Lean at Coors Brewing Company in the late 90s, and then I got my Six Sigma training at Johnson & Johnson in 2000. By the time I was working as a Master Black Belt a few years later, the concepts were starting to be formally blended by authors like Mike George, but those of us who had been exposed to both approaches were already integrating them.

Funny story…when I first joined a consulting company in 2001 and saw a 2-day simulation at a client, I came back to a leader of the company and said, “That was awesome. That’s the best Lean simulation I’ve ever seen.”

He looked at me, eyes wide, and protested, “What do you mean? It’s a Six Sigma simulation!”

We truly were at the cutting edge of the integration of Lean and Six Sigma. Some of the people who had been trained in the Lean approach weren’t yet familiar with the Six Sigma, and vice versa. Even the industry thought leaders were struggling to reconcile how to integrate the tools. It was an interesting time.

James: Well, we don’t have those kinds of issues any more. Lean Six Sigma’s concepts are accepted as mainstream, although we still occasionally hear debates about their effectiveness. Whatever they call it, just about every major company has tried implementing some version of Lean, Six Sigma, Continuous Process Improvement (CPI), Operational Excellence or a similar home-grown program in the last 20 years. But just like anything else that gets deployed in organizations, “Your results may vary”!

Dodd: Yeah, we hear different perspectives on the value of Process Improvement. I guess it’s hard for me to see why, since I’ve been doing it for so long and I’ve seen firsthand, many times over, the value of the tools and the mindset. Why do you think it’s so hard to do it well?

James: One of the main issues today is that everyone thinks they know what Lean Six Sigma is and how to apply the principles successfully, but that’s not always the case. The attitude might be that it’s as easy as reading a book or taking a class, yet as the saying goes, “In theory, theory and practice are the same. In practice, they are not!” The really funny thing is that all you have to do is try—the principles work great if you just go out and lead a project. You’ll get results and you’ll find more projects to work on. Wash, rinse, repeat.

In theory, theory and practice are the same. In practice, they are not!

Dodd: I completely agree with that one. The tools make perfect sense and seem intuitive when you first read about them, but there’s no substitute for practice. One of my first roles in applying the concepts was in leading a “Kaizen Blitz” program at Coors in 1998 and 1999. In the space of about 18 months, I got to run a Kaizen event in a different business process almost every week.

What a wonderful experience! I learned how to get thrown into a process that I really didn’t know well and then help a cross-functional team break it down and build it back up again. I found out that I didn’t need to be an expert in their process in order to help the team facilitate change. That’s what it’s all about: 10% is using the tools and following the improvement approach and 90% is change management. You Millennials are all about changing things, right?

Talking About Change vs Taking the Lead

James: Sometimes we’re better at talking about change than we are about persistently leading it, though perhaps every generation has that challenge—and yeah, that’s a shot at you Gen-Xers. That reminds me of a story from early on in my career—OK, that’s not so long ago!

Sometimes we’re better at talking about change than we are about persistently leading it, though perhaps every generation has that challenge

I had recently graduated with my bachelor’s degree and was six months into a hybrid IT Analyst/Project Manager role at a Fortune 200 technology company doing internal process improvement. I was essentially an internal consultant, even though I didn’t have much experience at the time. We were working on a project to identify and deploy infrastructure improvements to our overseas call-center model, since costs had grown without oversight for some time.

We had a problem during the discovery phase when the sponsor of the project—the VP of IT Services—began changing data collection and analysis requirements on an almost daily basis. That wasn’t solely his fault since nobody was entirely sure where to start, but it made it hard to make any progress.

Our team requested, on a couple of occasions, to keep the previous requirements so we could actually see if they produced the right data or results, which was always met with sponsor pulling rank and demanding the change anyway. This left the team and the project in a perpetual state of change, adjusting course without knowing whether or not the previous track was right or wrong.

A couple of weeks into the project, all of the recent hires, myself included, attended a “Lunch and Learn” with the Chief Information Officer (CIO). During the meeting, he spoke about his vision for implementing Lean and Agile principles across the division to create iterative project progression in a controlled way. He also noted this was not being received well by some of the leaders and suggested the change be spearheaded by the lower levels of the organization—us.

Towards the end of the session, I asked how associates at the base of the company could go about enacting this change if he already knew that it was not being accepted by the leaders. He responded that we would need to work that out amongst ourselves. He wanted things to change, but he couldn’t force the leaders to comply.

Not much changed before I left that group a little over a year later. While you could say that the CIO wanted the change to be accepted positively by the leaders and forcing it could cause the opposite, it’s also fair to say that he was asking a group of 22-year-olds to enact change that he couldn’t implement himself. He wanted change, he simply wasn’t sure how to execute it.

Dodd: Very true. Sometimes it’s easier to “talk the talk” than “walk the walk” and this fits right in with the previous discussion regarding the fact that Lean Six Sigma is 10% tools and 90% change management. We’ve all probably run into some challenges there, but I can’t overemphasize the most important point: just following the steps together using Lean Six Sigma tools with a cross-functional team can help you overcome resistance. The approach helps teams arrive at the right solutions together.

Next time, we should talk about some ways to do it even better!

“Hey Siri, run a regression for me.”

“Sorry, I couldn’t find anything called ‘run a regression’…”

Are we there yet?

As the Managing Partner for Implementation Partners LLC, Dodd leads transformational strategy and performance change efforts for a diverse set of clients, tailoring each client’s journey toward a culture of excellence. Implementation Partners exists to inspire and enable every leader to transform their organizations by giving every employee a chance to contribute their best work on an engaged, sustainable, winning team.