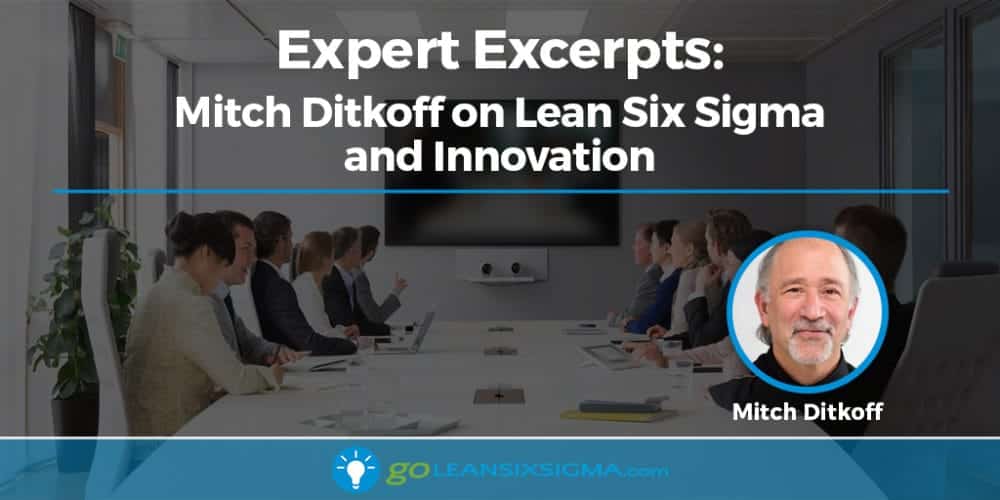 Whether you’re just starting your Lean Six Sigma journey, or you’re in the middle of improving a process, guidance from Experts can help make your efforts easier – and more successful! In this Expert Excerpt, we interview Innovation Expert, Mitch Ditkoff, who shares key insights to being successful with Lean Six Sigma.

Mitch Ditkoff is the Co-Founder and President of Idea Champions, an innovation consulting and training company headquartered in Woodstock, NY. His newest book, Storytelling at Work, won an Axiom Business Book Awards Bronze Medal in 2016.

You’ve been known for your work in innovation for decades now, but what got you started down this path?

The year was 1986. I was sitting in my New York City apartment feeling like I was at a crossroads in my life – a classic existential moment of questioning everything I was doing. I had a well-paying job, but it wasn’t really feeding my soul. To an outside observer, it looked like I had it all together. But, I knew there was something else I needed to be doing. After some deep reflection, it dawned on me that I had always been perceived, by other people, to be highly creative, but I had never really embraced what that meant. So I started reading voraciously about the topic – what creativity was, what enabled it, and what got in the way. The more I read, them more fascinated I got.

So I called a local radio station and arranged to be interviewed. My end game? To launch a creativity seminar in New York City – a way to stake my ground in the new career I was envisioning. At the end of the interview, the host announced the time and place of my seminar the following night. Thirty people showed up – people from every walk of life: wall street bankers, entrepreneurs, punk rockers, college students, and unemployed housewives. Everyone loved it and wanted to return the following week for Session #2. That’s when I called my best friend, Steven, and told him what I was onto. Three months later he flew to NYC and the two of us spent seven days and nights in deep dive mode, hatching the idea for what became Idea Champions – a training and consulting company whose mission was to help other businesses open the floodgates of creativity and innovation.

In the process improvement world, solutions come up in the “Improve” Phase or during a Kaizen. What advice would you give Lean Six Sigma practitioners to help them break out of their usual thinking?

First of all, get in touch with why you want to break out of your usual thinking. Unless a person is tuned in to their true purpose of going beyond same old same old, nothing much will change. They will, in effect, simply be arranging the chairs on the Titanic. Will they be improving things? Probably. But the ship will be going down. I say this with all due respect for Six Sigma and Lean Management. I know how important those disciplines are and I realize that many businesses would severely underperform without paying attention to continuous improvement. That being said, it is only one side of the coin. The other side also needs to be attended to – no matter what you call it: out of the box thinking, disruptive innovation, or Rumplestiltskin.

Unless a person is tuned in to their true purpose of going beyond same old same old, nothing much will change.

But that “other side” is not always easy to get to. “Innovation,” explained Tom Peters, “is a messy business.” It is not an exact science. Nor is it an exact art. While there are key principles at play, there is no innovation roadmap – no matter what 5-step, 7-step, or 10-step model is being promoted these days. If there was a roadmap, what would the signposts say?

I know that GE reached out to you years ago when they were bringing Six Sigma into their businesses. What role did you play in the rollout?

Two roles, actually. To begin with, GE invited my company to design and facilitate a module on creative thinking as part of their Black Belt training. While there were many fine left-brain improvement tools being taught in GE’s Black Belt program, there was nothing being taught to move people into a more creative mindset – the ground from which brilliant ideas emerge. GE’s first request to us was to do this as a one-hour module. Time and efficiency, as you might imagine, were highly valued at GE. Speed to market, too. However, the act of sparking creativity is not always a reductionist activity. It cannot be demanded from people. It can, however, be elicited. Tapping into one’s innate creativity takes some time. So I pushed back and built a case for a two-hour module – which my GE client agreed to, and we were off to the races. (NOTE: Our breakthrough thinking module was the highest rated module in GE’s Black Belt program). The second role I played in GE’s Black Belt rollout was writing and performing (along with Face the Music, the business blues band I co-founded) eight original blues songs – poking fun at Six Sigma – to help make GE’s annual Black Belt conference more energizing, thought provoking, and memorable.

However, the act of sparking creativity is not always a reductionist activity. It cannot be demanded from people.

What are some common mistakes you see people making when trying to innovate?

The most common mistakes begin in the mind. This is the self-talk and limiting assumptions that dominate people much of the time. When these assumptions and habits of mind rule the day, all new possibilities are filtered through that prism and what a person sees is a function of the lens they are looking through – not what is actually possible. Other common mistakes? Not framing the most powerful questions. Idea addiction (i.e. not being willing to adapt and adjust). Not getting diverse inputs early in the game. Not pulling together a team of collaborators (innovation is a team sport!). Being overly fixated on ROI in the early stages of the project. Bailing out too soon. Working in spaces (or cultures) not conducive to creative thinking. And not being prepared or confident enough when it’s time comes to pitch big ideas to senior leadership.

Is there anyone that has significantly influenced you over the years?

These days, I am on fire about the relationship between storytelling and innovation – more specifically, how storytelling, done well, can spark the creative mindset. Since I started Idea Champions in 1987, I have developed quite an extensive portfolio of innovation-sparking tools and techniques. But of all of them, the one I am most fascinated about is storytelling. For years, I told stories in my sessions to “build the case for innovation” and inspire people. But in 2012, I had a background/foreground shift. I realized I was under-appreciating the power of storytelling to change individual mindset and corporate culture. So, I started taking story out of the closet and began featuring it more. What I noticed is that every time I told a story (or had participants tell their stories), everything changed in the room. People became more attentive and receptive. Minds opened up. New connections were made. Boundaries dissolved. Curiosity increased. Assumptions fell away. Inspiration and possibility soared. And many powerful new ideas – both incremental and breakthrough – spontaneously emerged.

What I noticed is that every time I told a story (or had participants tell their stories), everything changed in the room.

The principle at the root of this phenomenon? Everybody already is creative. Everybody already IS innovative. It’s just that the DNA of this good stuff is buried. And where it’s buried is in our stories – those real-life, moments of truth we’ve experienced where we had direct access to the wellspring of our own brilliance, creativity, and wisdom. How do we access this wellspring? How do we transfer this “tacit knowledge” to others? Storytelling. And while appreciative inquiry and best practices are very much connected to this phenomenon, all too often they just skim the surface. Yes, I am interested in the sharing of best practices. But I am way more interested in the sharing of the best of best practices – and those kinds of best practices become known to us when we tell our stories. That’s why I wrote Storytelling at Work, my book about the power of personal storytelling in the workplace. And that is why I am writing the sequel, Storytelling for the Revolution.

The other two projects I am excited about is our brainstorm facilitation training and a phone coaching and mentoring service called Follow Your Muse. As I like to tell my clients, “Organizations don’t innovate. People innovate.” It is the inspired, committed, out of the box individual/champion that is the catalyst for innovation. That’s what my new Follow Your Muse service is all about – one-on-one coaching to help aspiring innovators navigate their creative process of turning big ideas into new products, services, and breakthrough ways of doing business.

What would people be surprised to learn about you?

My graduate studies (Brown University) were in poetry. From 30-35, I lived the life of a monk in an ashram. I was a political speechwriter for a New York politician. I was voted “Best Innovation Blogger” in the world, two years running. I once wrote a computer-interactive, make your own adventure book for Atari in 30 days. I co-created the first creative thinking training AT&T ever licensed. I invented the world’s first, interactive, business blues band. I almost drowned at 21. I saw an angel when I was 27. I have taught more than 5,000 people how to juggle. I have asked more than 10,000 people where and when they get their best ideas.

Have a question for Mitch? Please feel free to ask in the comments below.