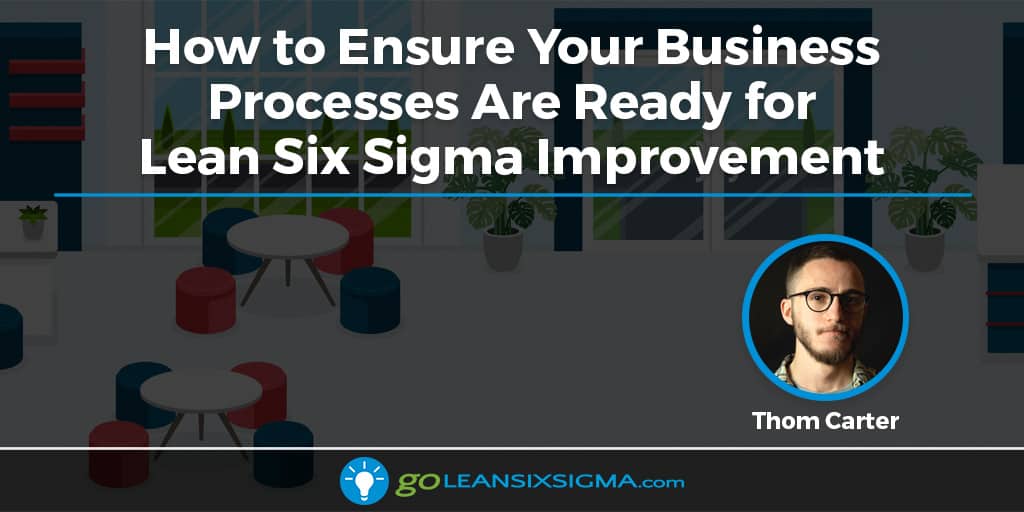 There are countless reasons why somebody would want to deploy Lean Six Sigma, from the process improvements that are at the core of any Lean Six Sigma project, to the measurable, quantifiable financial gains that come from optimizing an entire team’s processes. Suffice to say, having such a tried-and-tested, globally-renowned method for removing inefficiencies is sure to grab the interest of any enthusiastic team leader.

But before Lean Six Sigma is deployed—and before any formal Lean Six Sigma training—the foundations must be properly laid down. That’s to say, your processes must be Lean-Six Sigma-ready; documented, improved, and scaled. If they aren’t, your Lean Six Sigma project could inadvertently add to the high percentage—60%, in fact—of all corporate Lean Six Sigma initiatives that fail to meet their objectives.

While a major cause of project failure is due to having the Lean Six Sigma expert, who’s at the helm of leading the assigned team, pulled away from the team to work on various other projects, not having a solid foundation before deploying Six Sigma could push that already-high statistic even higher.

That’s why, in this post, I’m going to tell you all you need to know to get your business processes into shape, ensuring they’re 100% Six-Sigma-ready.

First thing’s first: You need to get the buy-in of those at the top of your business, particularly the executives and the C-suites. Without having their support, it’ll not only be impossible to deploy Lean Six Sigma properly, but it’ll also stop all the other employees from being interested and engaging with Lean Six Sigma and its prerequisites.

Getting executive-level buy-in needn’t be a daunting prospect, though. Bypass the hard-to-understand lingo of Lean Six Sigma, process improvement, and processes when meeting with them. Talk their language by discussing the bottom-line benefits. Inform them of Six Sigma’s origins at Motorola and General Electric (GE) in the 80s and 90s and how, since then, Lean Six Sigma has saved not only these two high-rollers but countless SMBs and other enterprise-sized organizations significant savings. In fact, The Keefe Group recently reported savings of 2.5 million dollars per year due to their team-wide Lean Six Sigma initiatives.

Additionally, you’ll want to discuss Lean Six Sigma concerning your company’s business needs and how Lean Six Sigma can help your team to further meet those all-important needs. For instance, a company providing outsourced customer service may want to quicken their response time further. By telling C-suites et al that inefficiencies can be wiped out using the qualitative and quantitative data that Lean Six Sigma tools provide, and that the staff’s response time can, indeed, be quickened once process improvements have been made, you’re sure to capture their attention.

What I’m getting at with the above examples of GE’s savings and the hypothetical customer service company is that you need to cut to the chase when presenting Lean Six Sigma: Talk savings, and certainly talk success.

Once you have top-down support, you’ve completed the first part of getting your processes ready for Lean Six Sigma. But what’s more is that you’re beginning to establish a culture of processes. Having a culture of processes isn’t just about using the processes and SOPs every day of the workweek—it’s more than that. It’s about thoroughly understanding those processes, seeing how they work, optimizing them when improvements can be made, and recognizing the power and potential of processes in a profound way.

Having a culture of processes within your organization is, in short, nothing but positive. Your recurring tasks will be better, stronger, and faster than they were in each previous iteration, clinching you an advantageous lead over your competitors. Plus, having a culture of processes will make ventures into quality management systems such as ISO 9001 far easier, too!

With all that said, it’s time to move onto the next stage: Process documentation.

To put it into layman’s terms, process documentation is the act of noting processes down.

There are various ways to document processes. From going with the trusty method of jotting steps down in a written list, or going the visual route and using something like a flow diagram to display the steps of the process in question.

Either way, what’s important at this stage of the game is simply to get the processes down. Although business process management software or standard operating procedure software is preferable here (especially as you’ll be switching to a dedicated, process-focused tool later on), you could instead opt for something as simple as a Google Doc or an Excel spreadsheet. 96% of businesses already have their processes documented in one form or another, so it’s time to join them if you haven’t already.

Now, unless you have in-depth, thorough knowledge of each and every one of your team’s processes, you won’t be able to document them all on your own. Luckily, considering processes just need to be noted down in their most basic form at this point, it’ll be a task everyone involved can breeze through.

However, for example, let’s say there’s an important process a high-level exec goes through regularly; every day, in fact. Considering their position, their workdays are already jam-packed as it is, meaning they may not be able to carve out the time to document this process.

An alternative to them documenting it themselves would be for them to download a screen recording tool such as Loom. Once downloaded, they record and go through their process step-by-step, talking over what they’re doing, why, and what the intended outcome is. After the cloud-hosted recording has uploaded, the link can be pinged to another member of staff who can then document that process properly.

While a bit of creativity may be required to get all processes documented, it’s an essential part of preparing processes to the degree needed for Lean Six Sigma.

What’s the Order of Prioritization?

What’s also important to note is that, when it comes to the order in which the team’s processes are documented, you’ll want to first consider questions such as which processes are used the most frequently and which generate the most output. By asking these questions, the answers will culminate in you knowing which processes have the highest ROI, and therefore which should be documented first.

Similarly, you’ll also know which processes could contribute to the highest ROI growth if improved, meaning they too should be documented as soon as possible. After integral, often-used, and potentially great processes alike have been documented, the second part of the preparations is complete.

Merely having a collection of documented processes, before Lean Six Sigma even comes into play, is a beneficial feat in itself. You’re bettering your aforementioned culture of processes, you’re dramatically increasing process adherence while simultaneously reducing the normalization of deviance, and you’re boosting team collaboration and boosting productivity.

Even with those benefits, it’s not time to celebrate quite yet.

The next step is to use the now-documented processes. Don’t worry; it won’t be only you who’ll be doing this. In fact, it’ll be your whole team.

Having the entirety of your team use the documented processes is crucial for a myriad of reasons. And there are two reasons why I want to discuss in detail.

Seeing as the documented processes will need to be tested team-wide, a Google Doc or Excel spreadsheet—let alone physical pieces of paper—will no longer suffice. A dedicated tool, such as process workflow software, has to be utilized. It’ll make the documented processes easily accessible, will allow multiple employees to follow the processes (and remotely, too), and provide everyone with proper process oversight. It’ll make this part of getting the processes ready far more streamlined, to boot.

To clarify, what I mean by “make process improvements” is going into each documented process and editing it appropriately, whether that means adding new steps, taking ones out, or clarifying how to go about a certain task.

As already mentioned, these pre-improvements will mainly be qualitative, and reacting from what people have said they felt would be an improvement, where they feel there are bottlenecks and inefficiencies, and where they feel they’re struggling with a certain step. It’ll be through following the DMAIC methodology and using Lean Six Sigma tools such as process mining where the true quantitative data will be gathered. However, if you want to measure how the documented processes are faring by measuring them up to KPIs already, then go ahead. If it helps, it helps.

Now, even these smaller pre-improvements can radically bolster the processes and generate a return on investment. For instance, let’s say a pre-improvement has redefined the flow of a particular process, causing it to be completed 10% faster. If that process is completed 10 times a day by 10 different individuals, that means 100 processes a day are finished quicker.

The efficiency gains here are massive, especially when you realize that the improvements equate to having another fully-onboarded team member. And the more your team keeps following processes, improving them, and reinforcing best practices, the larger the overall gains will be. This is why 93% of survey respondents told process guru Paul Harmon that they were engaged in multiple process improvement projects.

Once pre-improvements have been made and the processes have been scaled, there’s only one more thing to do: Prepare for Six Sigma deployment.

On top of that, you’ll want to decide which Lean Six Sigma tools you’ll use. These could include (but aren’t limited to):

If you aren’t already aware, you won’t need to use all of these tools at the same time. You’ll simply pick and choose which will be the most effective for your Lean Six Sigma system.

To learn about DMAIC and Lean Six Sigma tools properly, you’ll need to do more than read a blog post, though. While a blog post like this will certainly suffice for getting business processes prepared for Lean Six Sigma, for actually implementing Lean Six Sigma in a continual, effective way, training is absolutely essential, especially if you’re the one who’ll be leading a team. And where better than to start right here, with GoLeanSixSigma.com’s professional online training and certification?

I can’t wait, once you’ve got your business processes in order and have undergone Lean Six Sigma training, for you to get your belt and lead your team to success.

Thom James Carter is a content writer at Process Street, where he writes about processes, systems, SaaS, and all things tech.
Poll
Need great pricing for your team?
Get a Quote
[templatera id="117317"]
Copyright GoLeanSixSigma.com - All Rights Reserved
Cart
Search