My Account
Start a Free Trial for Your Team
Register 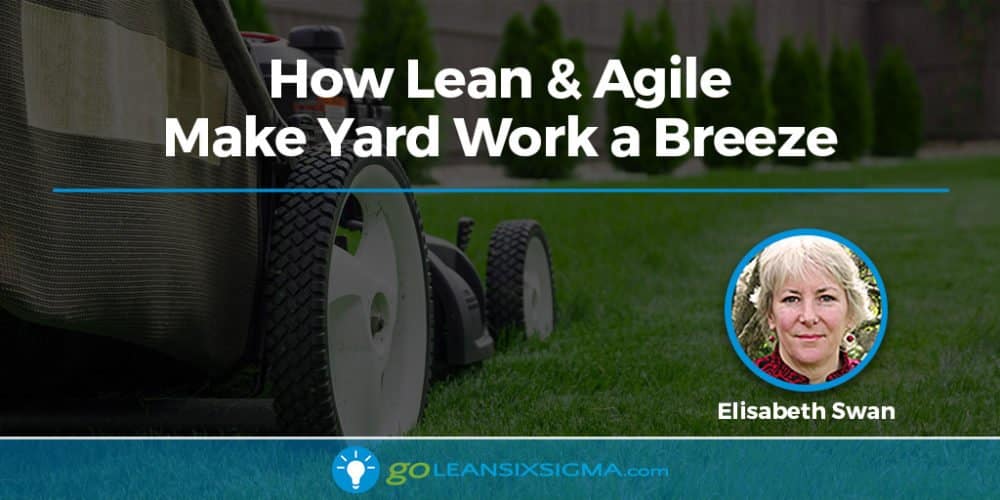 So what does yard work have to do with Lean or Agile? They both benefit from something called a Kanban Board. Kanban is Japanese for “signboard” which was originally developed as a way to regulate production at Toyota. You’re probably thinking, “Mixing yard work with software. What?”

At its core, the Kanban Board is a deceptively simple way to visualize workflow. The same tool responsible for making software development teams run smoother, faster and with greater accountability can be used anywhere teams collaborate. Once you understand how easy it is to use this tool, you’ll want to apply it to everything. I swear, everything.

Once you understand how easy it is to use this tool, you’ll want to apply it to everything.

Many years ago, my family and friends gave my parents the gift of a fall workday here on Cape Cod, Massachusetts. We spent the day pulling leaves out of the gutter, repairing holes in the deck, performing maintenance on the water heater and generally getting them ready for a northeast winter. We also put a truckload of composted manure on my father’s garden and in return he affectionately called the occasion, “Merde Gras” (“merde,” French for manure…get it?) Not the classic Mardi Gras of New Orleans, but our own festive tradition was born.

We have celebrated Merde Gras for seven years straight. Each year there are dozens of skilled and unskilled workers travelling from near and far to work together on dozens of projects in order to prepare my parents for the long winter months. Every year I confer with my husband, my sisters and my mercifully good-natured brothers-in-law and we come up with a list of what it will take to make sure our parents are safe and secure.

During “Merde Gras” days of old, I’d find myself the center of attention as crew members arrived and asked what to do.

Well, yes, there are always brownies, thanks to my sister Amanda, but the whole list business was distracting. I found myself pulling the increasingly messy batch of pages out of a pants’ pocket, carefully scanning for a job that might match the skills of the person asking and then checking whether it had been done yet. Nine times out of ten, the person asking would tire of waiting and go off searching for something to do. 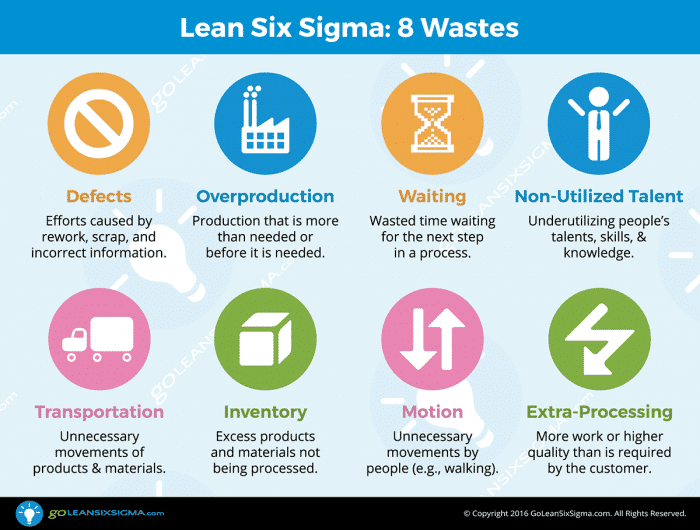 There’s Got to Be a Better Way

Those of you schooled in the 8 Wastes will notice the waste of Waiting and the root cause of the wait was a bottleneck: Me. It finally dawned on me, after 25 plus years in the field, that I had a treasure trove of Lean Six Sigma tools and techniques to choose from to improve this this process. This time I reached into the Agile world and chose the Kanban Board. Research shows that the brain can process visual information over 50,000 times faster than text, and this visual workflow tool is specifically designed for team collaboration.

Research shows that the brain can process visual information over 50,000 times faster than text, and this visual workflow tool is specifically designed for team collaboration.

In the Agile world, this becomes what they call an “information radiator.” It gives the members of a software development team all the information they need to know at a glance. They can see where they are in a development cycle along with lots of information about the tasks they should be working on. We here at GoLeanSixSigma.com use the software Trello as a digital Kanban Board to rollout our online training, so why not give our Merde Gras Work Crew the same kind of information?

We created 3 lanes on the board:

The Agile world might have “Next,” “In Development,” “Done,” “Test” or “Deploy” etc. I’ll let that slide since they work on projects for more than a day. 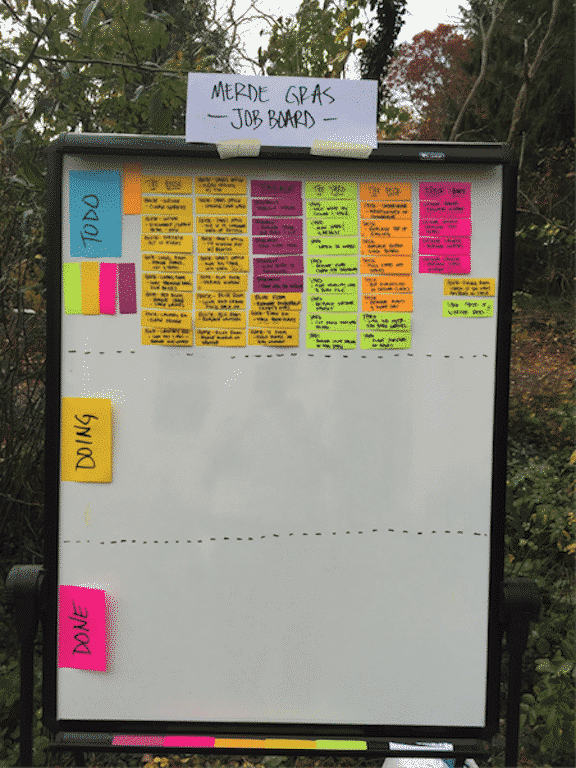 We color-coded the jobs by work area:

In the Agile world they color code by “story” which might be a software system requirement. Agile breaks the stories down into sub-tasks, and in our little Merde Gras world, these sub-tasks became individual jobs. “Repair the Deck Railing”, “Put Up the Storm Windows” or “Build the Cellar Stairs.” Sticky notes, the universal visual messaging tool, do the trick no matter the workflow being displayed.

Molly, a long-time crew member let me know that after the long drive from Boston she felt a little car sick. “I can’t work inside. Let me see what has to happen with the yard.” I led her over to the “Merde Gras Job Board” and she zeroed in on gathering and stowing the outdoor hoses from the green “Yard” tasks and immediately moved the job tab into the “Doing” lane. That was the last time I gave her instructions. As she found her sea legs, she moved more jobs into the “Doing” and “Done” lanes. 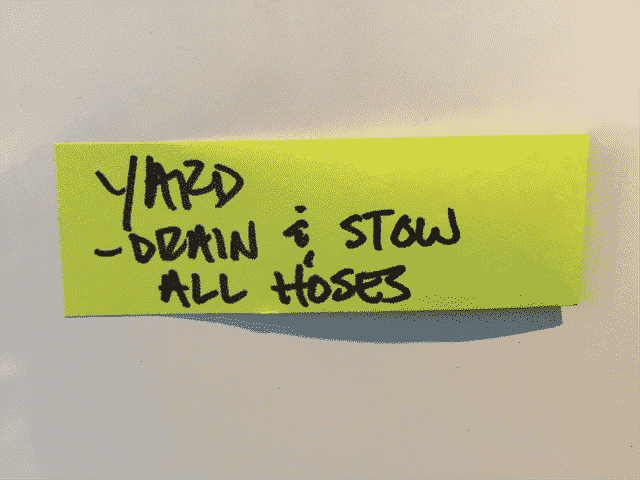 Some people only see each other once a year at this event and they look forward to joining the same crew and working on the same jobs each time. When Julie, a local friend arrived she looked into the “Doing” lane to see if the all-girl log splitting crew from Boston was at work. The tab was in the “Doing” lane, so she promptly headed off to find her compatriots in the side yard.

Others let me know that after choosing a job, they realized they couldn’t complete it. When my nephew’s girlfriend Katy went to put plastic insulation on the bay window, she realized the tape was missing. In the Agile world this is a “blocker” and has to be noted on the Kanban Board. Until the tape was found, and blocker was resolved, that job stayed in the “To Do” lane with a red dot.

And some jobs had become famous for difficulty. The basement has a reputation for spiders, cobwebs and unidentified “dust” so we put special “frowny faces” on those job stickies. That way only the hardiest of the work crew would tackle them. For some, the basement jobs became a badge of courage. This is the same for the Agile world. Some stories are more difficult than others and might require special skills. 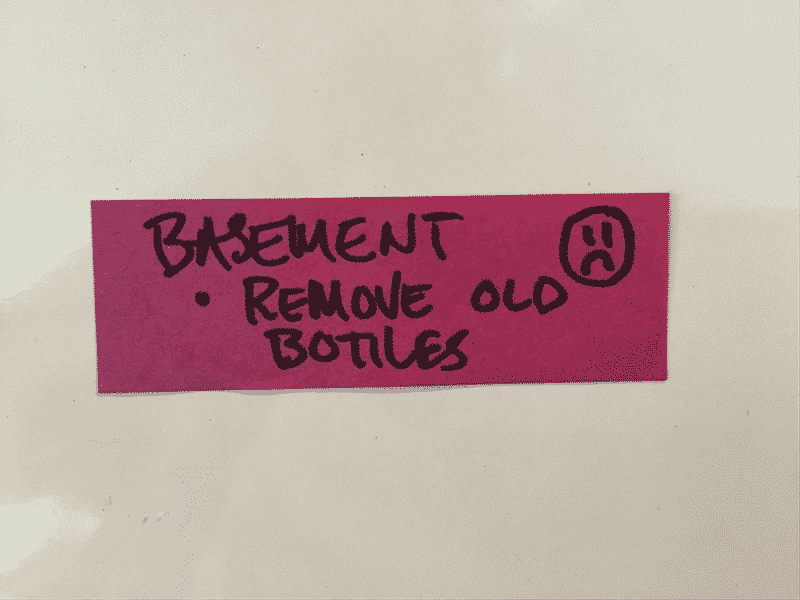 By the same token we added a blue dot on all the jobs requiring fine carpentry. We had some talented wood workers and they knew they were the only ones who could replace deck boards, build railings or repair windows. My brother-in-law Jake grabbed the basement stairs; our friend Chris replaced a second floor window while two of my nephews, Sam and Cooper, tackled the deck railing. 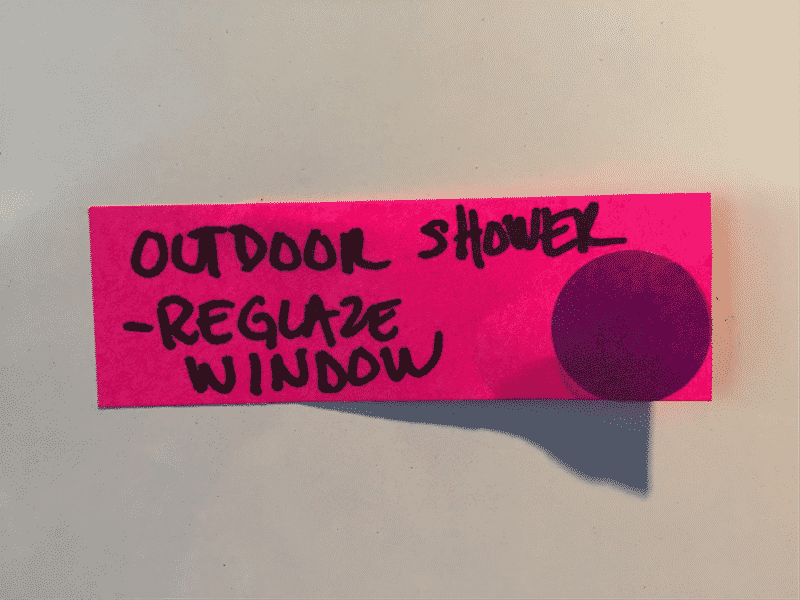 The Magic of the Board

As anyone who brings Lean Six Sigma Tools into the home can tell you, it’s not done without some personal peril. Although my family continues to ask me what, exactly, I do for a living, the board became a magnet throughout the day. Individuals made sure their job “stickies” went into the “Done” pile, new recruits knew exactly what to do when they arrived throughout the day, and everyone made continual return visits to find out where else their skills were needed. 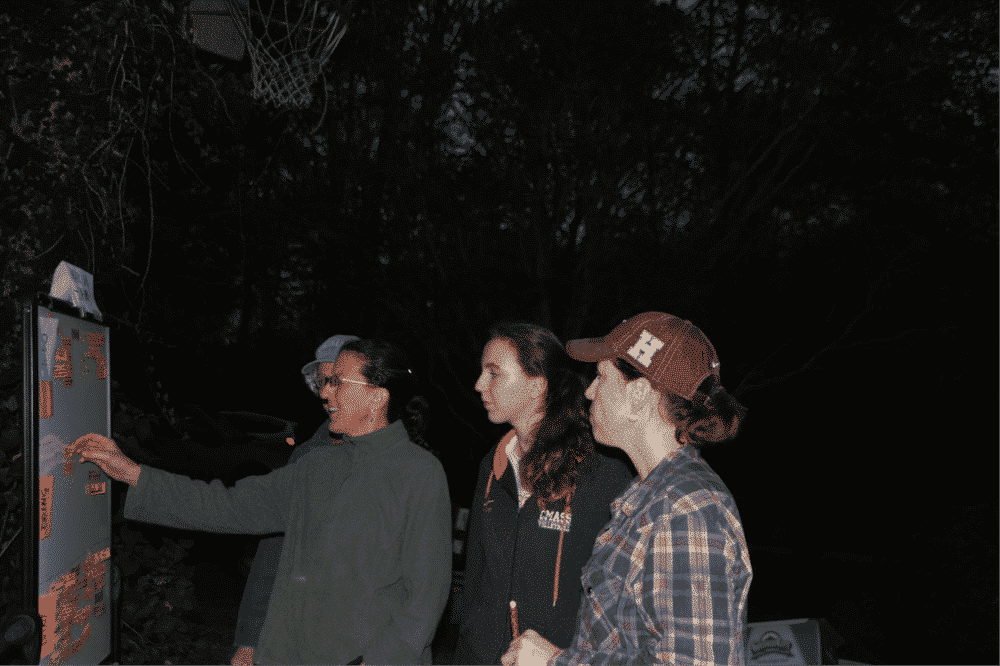 Of course the big winner is my eighty-four year-old mother who was not just the beneficiary of the Merde Gras Kanban Board, she was a member of the work crew. She picked a “Deck” job and spent the afternoon removing the glazing from the outdoor shower window. “Done!!”

There are more colors, imagery, symbols and other nuances that you can add to any Kanban Board to make it work for the process at hand. Are you ready to build one? Grab some tape, some stickies, maybe a few dots and you’re ready for action. Go visual. Go Lean. Go git ’em!

To learn more about Kanban Boards and other helpful Lean Six Sigma tools, register for our Green Belt or Lean Course and start improving today.