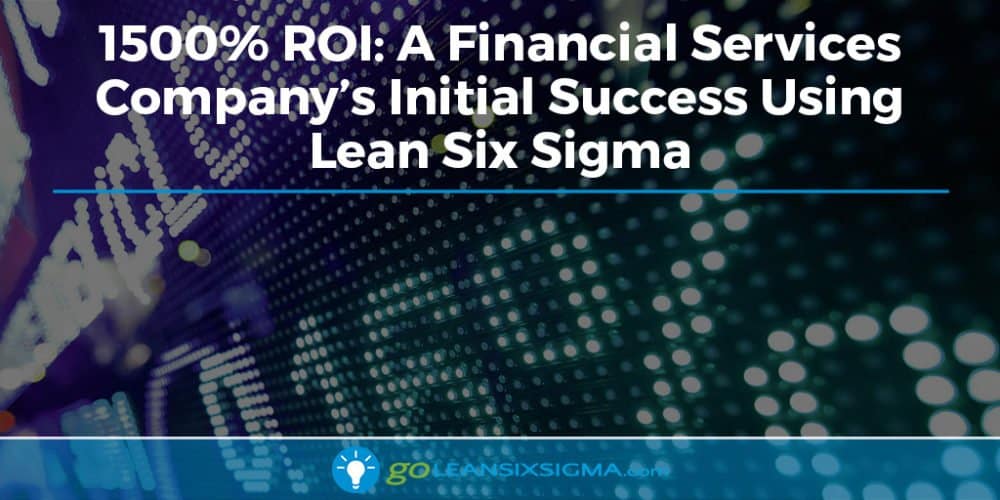 A challenging business climate had led a mid-size Financial Services organization to think about pursuing Lean Six Sigma as a way to improve their internal efficiencies and to build a stronger tie to their customer requirements. As it has been for many of us, when I say a challenging business climate, I mean a increasingly volatile and sometimes disastrous environment. This company was having a great deal of difficulty responding to what has occurred in the overall economy in the United States since 2008.

We started with a rapid assessment of where they were and where they wanted to go. We then had a discussion of how they could move forward on the journey. One issue shared by many was the challenges the organization had around following through on ideas and executing changes. While the group liked the insights and the possibilities, there was concern about overreaching and this becoming the latest “flavor of the month.” Understandably, they wanted to be careful and conservative in their launch of the effort.

With financial and technological limitations as a backdrop, the organization wanted to test the waters with Lean Six Sigma.

With financial and technological limitations as a backdrop, the organization wanted to test the waters with Lean Six Sigma. No large projects up front and no projects that might have an IT impact. They also wanted projects to minimize additional work on an already stretched workforce. They were determined that the work had to at least pay for itself for it to be considered a success.

Off to an Amazing Start

The organization targeted several projects for the initial launch, covering many of the key areas in the business. Here are just a few of the results from initial project teams that were shared with leadership:

One project came into the initial sessions with an answer already formed, but was willing to go through the process so that they could be certified in the methodology. A funny thing happened as they moved from their initial problem idea in Define through the Measure and Analyze phases of the project. The team found and then implemented an opportunity to deliver roughly 30 times the benefit their change would have captured.

Results Before Implementation Even Began

Another project called me frantically one evening because they found that by communicating about the Voice of the Customer and the requirements of the process with internal people in the process, the process had already improved more than their initial goal. They had not been able to make any actual changes to the process yet. They were concerned that this would be a problem. When they were able to implement their changes, the process became even more efficient, smooth and timely.

Another project found savings as well as improvements in both security and cycle time for handling and storing files at the organization. They were able to implement changes to simplify the system for all parties.

One project was able to impact how often customers needed to call with questions about status of items. This had a positive impact on both the work that needed to be done internally and on customer satisfaction. Each call from a customer was because they needed some information we had not provided.

A project to look at how the company purchased services and materials found that through better coordination, negotiation and tracking, significant savings were available. They were able to put a process in place to remove much of the variation and waste, resulting in large savings.

A 130% Increase in Productivity and Improved Teamwork

One project looked at an auditing process that was provided to their business customers to review files for trends. Customers valued the file reviews and asked for more to be done with shorter turn around times. The company had been unable to increase volume or reduce the turnaround time of the information. Through the project team, they were able to cut the turnaround time to a third of what it had been and to increase the volume of files reviewed as productivity for each rep increased by 130% due to the process changes. The reps liked the new process much better as well and it has improved their teamwork.

How did we do on at least breaking even on cost? The total dollar return of the projects created an annualized benefit well over 15 times the investment.

The potential bigger impact for the company is a group of people who understand how to apply the concepts of Lean Six Sigma to business issues and implement solutions that will deliver value into the future. Many of the participants in this initial group have already implemented additional improvements in the business and continue to help the culture move forward to embrace continuous improvement.