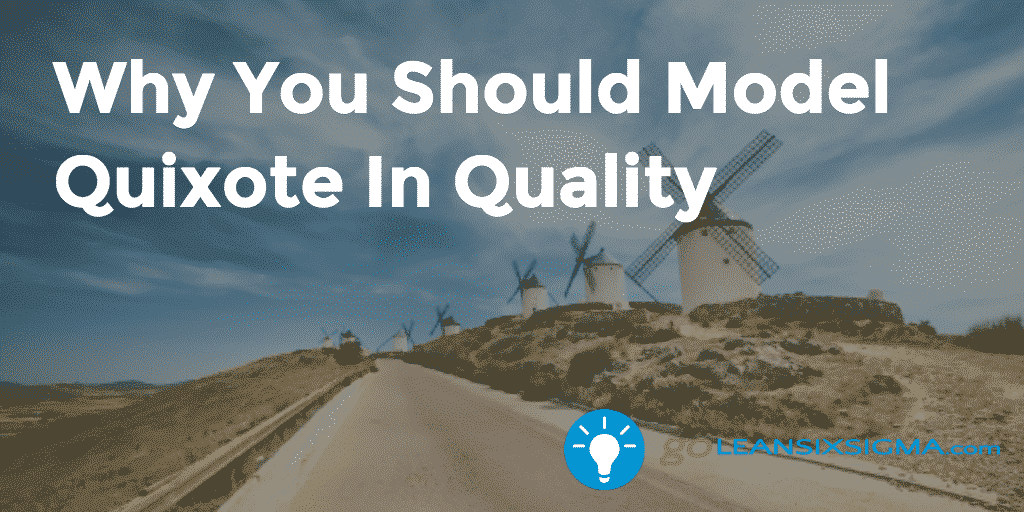 Don Quixote prioritized imagination, commitment, passion – and fused them with purpose. How might employing his character as a role-model for our journey through Quality affect our results?

Borrowing from the work of James G. March,1 professor emeritus at Stanford University, what insights concerning quality can be drawn from observing Cervantes’ character of Don Quixote? 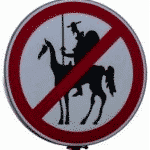 Given Quixote’s penchant for storming windmills, he seems an unlikely source of guidance. If his inability to differentiate between a giant and a windmill were not enough to question the worthiness of Quixote as a role-model, there is also the glaring inconsistency with most of his observable traits to any reasonable code of ethics. Quixote is quick to love, quick to judge, and quick to battle. He is inconsistent, biased, and often unpredictable. In addition, while the character of Quixote considers himself a champion of what we might call process improvement, Quixote is far more likely to cause pain than improvement. What lessons can be drawn from observing such an unreasonable character?

The Role of Imagination & Wonder

Imagination and wonder expand our horizon; these quixotic lenses can reshape not only how we see the world but how we interact with it. Imagination and wonder enable us to break through and beyond traditional patterns of understanding and any dependent approaches to problem-solving; they encourage us to seek innovation and uncover previously hidden possibilities.

It should be noted that calling for quixotic lenses is not the same as suggesting “anything goes!” Even without the benefit of a “goodness-of-fit” test, we can all agree that we should not use our scientific calculators as make-shift lances and charge our client’s buildings. Infusing our action with imagination frees us to consider new and potentially better approaches. Innovation may emerge. As John Dewey noted in his Recovery of Philosophy, the inverse also applies: “in a complicated and perverse world, action which is not informed with vision, imagination, and reflection is more likely to increase confusion and conflict than to straighten things out.”2

Infusing our action with imagination frees us to consider new and potentially better approaches.

Consider the task of drudging through a less than favorable Voice of the Customer (VOC) survey. What if we turned from a sense of wonder best characterized by “how many different ways can a customer possibly express the sentiment of ‘you stink’” and more towards the unbounded sense of wonder that moved Quixote?

The resulting experience would differ in at least three profound ways.

Undoubtedly, there is at least one additional level of engagement to consider. We must, at some point, face the equally formidable beast of entrenched company habits. Both fronts of engagement will be drawn-out affairs. Both will offer very little promise of success and the unattractive guarantee of injury and repeated failure. Observe that Quixote, the exemplar of the unreasonable, donned armor and a helmet prior to charging!

The Role of Commitment

Given the number of defeats and painful lessons that would surely follow from emulating Quixote, it would also be fair to question the wisdom of following Quixote. At the novel’s conclusion, Quixote meets his death quietly and, in full humility, admits meekly, the madness of his ways. Why emulate failure?

In order to judge Quixote adequately, consider what March has referred to as the logic of action.7 We are accustomed to assessing success through the evaluation of outcomes. For example, we might want to reduce the Defects Per Million Opportunities (DPMO) from a current level to a future state of less than 3.4 per million. Failure to meet and to maintain the stated goal becomes central in evaluating success. However, Is such an evaluation of the consequences sufficient?

…allowing failure to define us and to turn us away from what nourishes us — from what is truly needed — is a far worse outcome.

Quixote offers us an inverted logic of action in which the focus is turned from consequences. Instead of focusing on results, quixotic commitment challenges us take sustenance from our ideals. From this vantage, failure to meet a goal is not the worst thing that could happen; allowing failure to define us and to turn us away from what nourishes us — from what is truly needed — is a far worse outcome. To use the example above, if we want to move a company towards a Six Sigma goal then cultural change (commitment) must  precede and drive the change. From this view, we should focus on the ideals that drive the culture if we desire real change. To focus solely upon the DPMO measurement is to prioritize an abstraction over a cultural reality.

Quixote, when assessed through the inverted logic, was not a failure. He becomes a champion of authenticity. His commitment reflects not only consistency to his values but an ethical courage that is rarely witnessed. He stayed true to his cause and was unmoved by a consequential logic even when it would have been reasonable to surrender.

When we witness quixotic commitment,  we tend not to remember outcomes but the commitment itself. For example, when we witness an Olympian compete, the result seems secondary to the sense of awe inspired by such commitment. What lingers is a stirring best articulated as a visceral sense of possibility. Prompted by a sense of “what if,” we can be so moved by another’s commitment that we, too, dare to challenge limits. We take the opportunity to rededicate ourselves to what we feel is important.

Through his commitment, Quixote reflects what Margaret Wheatley has termed the “messiness and beauty that name us alive.”8 We, like Quixote, are flawed, unpredictable, and so often mistaken. Our lives are rarely linear; effect is only sometimes proportional to cause. Emulating Quixote, therefore,  is not to emulate failure but to embrace the wholeness of who we are, and, who we might dare to become.

The Role of Passion & Purpose

What if in our practicing of quality, we, too, were moved by the passionate sense of purpose that guided Don Quixote? Most of us would object to the prioritization of purpose. There is a long-standing assumption in quality that reason is “first and foremost” and that all decisions should be reasonable, i.e. data driven. What should count, according to the traditional view, are the “facts” of the matter.

On the contrary, Deming asserted within his The New Economics9 that what counts the most is not objective fact but the purpose at hand. Deming employed an analogy of counting people in a room to support his claim. Ordering the correct number of lunches for the inhabitants of a room is a vastly different problem (and entailed different rules of counting, operational definitions, and procedures) than counting the number of people in the room in order to assess compliance with fire and safety codes. Given that the “facts” of the matter differ depending upon purpose, Deming concluded “there is no such thing as a fact concerning an empirical observation.”10 In other words, facts are dependent upon purpose. Purpose, therefore, ought to be prioritized.

In other words, facts are dependent upon purpose. Purpose, therefore, ought to be prioritized.

When infused with the vitalities of imagination, commitment, and purpose, quality is reconstructed. The reconstructed sense of quality is not limited by consequences, not defined by reason, and not determined through convention. Quality becomes a craft and we, as practitioners, become quixotic artisans. The vision is also reconstructed and is admittedly unreasonable: people are more than human calculators; quality is more than the sum of data-driven decisions; and process improvement is real possibility that cannot be contained by the static logic of fixed bodies of knowledge.

How do you make Quality your craft? Please tell us by commenting below!

Do you want to learn more? Register for Green Belt Training & Certification today and commit to quality at work and at home!

Kurt Stuke is a quality manager for AdeccoUSA and a Lean Six Sigma Black Belt. He holds a doctorate in leadership as well as master degrees in philosophy and theology.
Poll
Need great pricing for your team?
Get a Quote
[templatera id="117317"]
Copyright GoLeanSixSigma.com - All Rights Reserved
Cart
Search