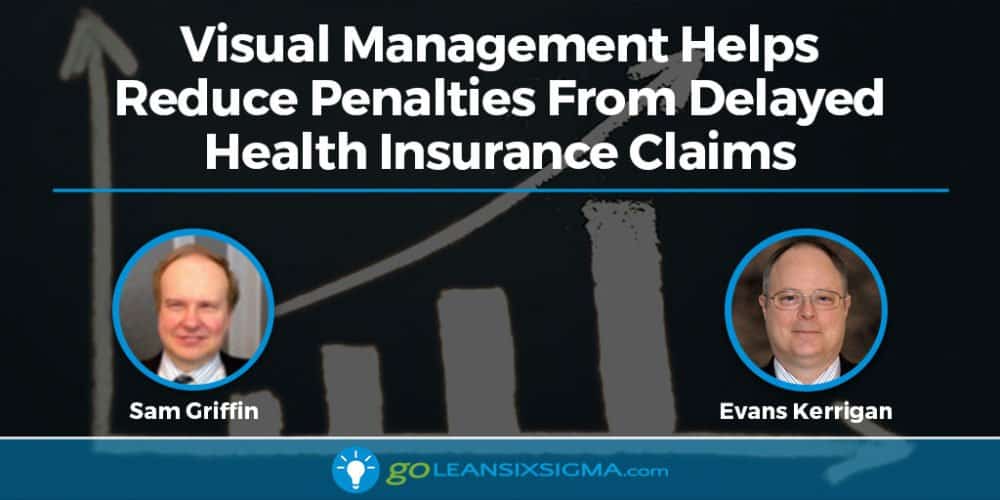 Have you worked on projects that only produced temporary benefits?  Locking in improvements and even continuing to ratchet up the performance of your processes can be challenging; many would say the most challenging piece of continuous improvement.  It is also this work that begins to move the culture forward.

A powerful tool, that all too frequently groups do not make full use of, is Visual Management. It is often said that if we want people to be accountable and responsible, they need to have access to the data.

While the processes of Lean Six Sigma frequently employ multiple methods to uncover better ways of accomplishing what we need for our customers, the biggest challenge that most organizations face in continually improving their business is holding on to the gains produced and helping people continue to make improvements as time passes.

Visual Management works by keeping key metrics that people can use for managing their work in front of them.

A major state-wide health insurance carrier was migrating to a new production system for all of their claims. The previous system was based on 30 year old technology and support of the “legacy” system was becoming expensive and time consuming. The migration to the new system was set to be a multi-year project.

A state mandate requires that all medical claims should be paid within a specified number of calendar days of receipt of required claim information. If the payment exceeds that time, there is a penalty applied to the payment amount. This penalty is prorated by the number of days over the specification days and paid to the provider, either a hospital or physician.

In 2008, nearly 2.5% of claims paid with the new system were having an interest penalty applied to them. These penalties were seen by the organization as a cost of doing business, but with less than half of the members migrated to the new system, the volume of dollars would increase dramatically if the issue was not addressed.

In 2009, two Lean Six Sigma projects were completed to address the growing volume of claims with interest penalties. The projects were separated by addressing electronic claims versus paper claims submissions.

A few of the major findings from the Six Sigma projects were:

The third bullet had the biggest impact. In the past, penalty dollars were thought to be the responsibility of the financial areas of the corporation, since it dealt with dollars being paid.

Visual Management to the Rescue

The migration to the new system was completed in 2011. The chart above reflects the downward trend in the percentage of claims associated with interest penalties over the past 4 years. There is still room for improvement, but we have started the trend in the correct direction and have prevented an additional $2M in 2011 if the same penalty rate had continued through.

All formal changes to the process from the work were implemented in 2009 and had a positive effect on reducing the frequency of penalties and the dollars associated.

Several ideas kicked off smaller efforts to address aspects of the bigger issue. Volume of work processed has increased more than four-fold, and the visibility of the process performance and continued focus on addressing issues has been a critical aspect of the company’s financial performance.  As the data has remained a focus on the dashboard, management has continued to find ways to see the process with “new eyes” and uncover ways to further refine the process and reduce the penalties.

What improvement projects are you currently working on? Tell us how you’re improving in the comments below!

Sam Griffin, a Certified Black Belt, currently holds the position of Vice President, Performance and Metrics at Blue Cross Blue Shield of Louisiana. He has over 35 years experience in the Health Care Payer industry.

Evans Kerrigan is a Managing Partner at Integris Performance Advisors. He has spent 20 years assisting organizations to improve their management practices and business processes.