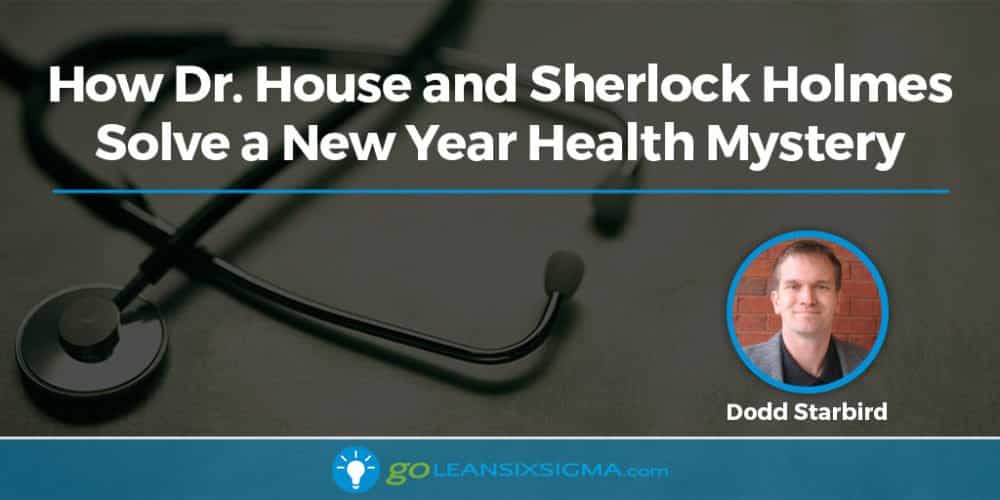 My 22-year-old son James got sick over the holidays. The rest of the family was on a trip while he was at home, so I wasn’t able to help much. My suggestion to him? “Go to the emergency room.”

He went there on New Year’s Day, which gave us a great start to the year by immediately hitting the deductible on our health plan! Sadly, after a long visit and a number of expensive tests, they didn’t figure out what was wrong with him, even though all of the evidence was there for them to make the right diagnosis. The reason they failed wasn’t an error by a healthcare provider; the problem was embedded in their process!

Like many other businesses, hospitals have a multitude of roles, with many well-intentioned people who have a genuine focus on patient care. If you’ve been to an emergency room lately, you have probably seen a number of variants of the process: 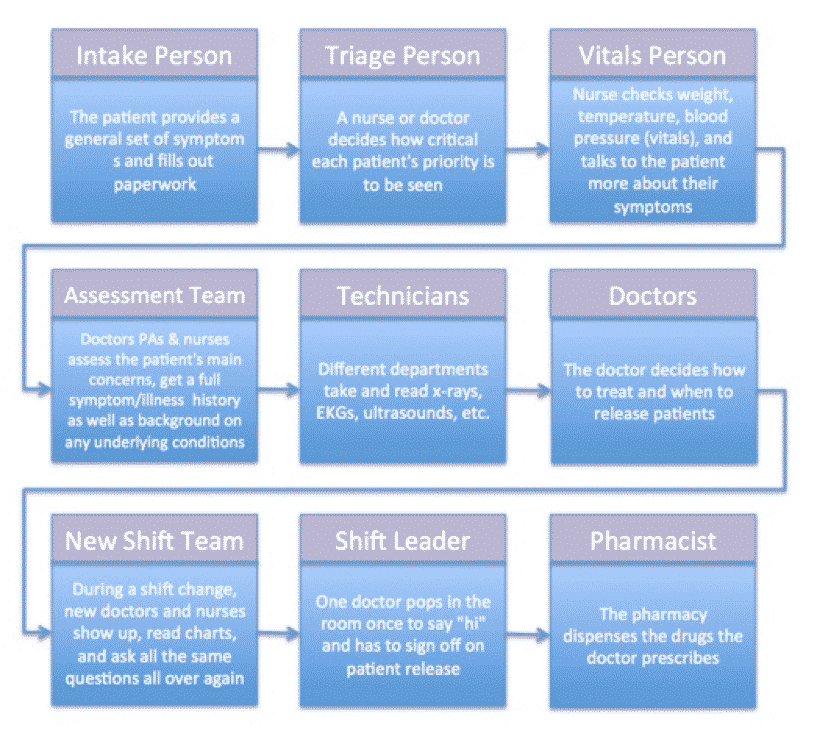 Sometimes hospitals combine some of these roles, and other versions of the process have different people in each role. James saw this entire assembly line at the emergency room that day.

As you may be aware, the assembly line was a really good idea when Henry Ford popularized it for making cars. It allows operations to drive functional excellence by having people specialize in different roles, and they become experts in their jobs. But assembly lines sometimes have other negative, hidden consequences. Here, we’re going to focus on the impacts of handoffs on quality and root cause analysis.

But assembly lines sometimes have other negative, hidden consequences.

As the patient talks to each of these healthcare providers in the assembly line, ideally they should all hear the same story. It should also be written in the chart and read by each additional practitioner or individual in the downstream process. No problem, right?

But as the story unfolds, the patient can give nuggets of critical information to different people based on their roles and specialties, which all may be responsible for asking different questions. The patient may then fail to provide all of the important nuggets to each role in the process. The information makes it into the chart but might not be reviewed holistically by each specialty. One role sees one important nugget, and another role hears another nugget, but because no one practitioner knows everything, the root cause gets overlooked.

Can you solve the mystery here? 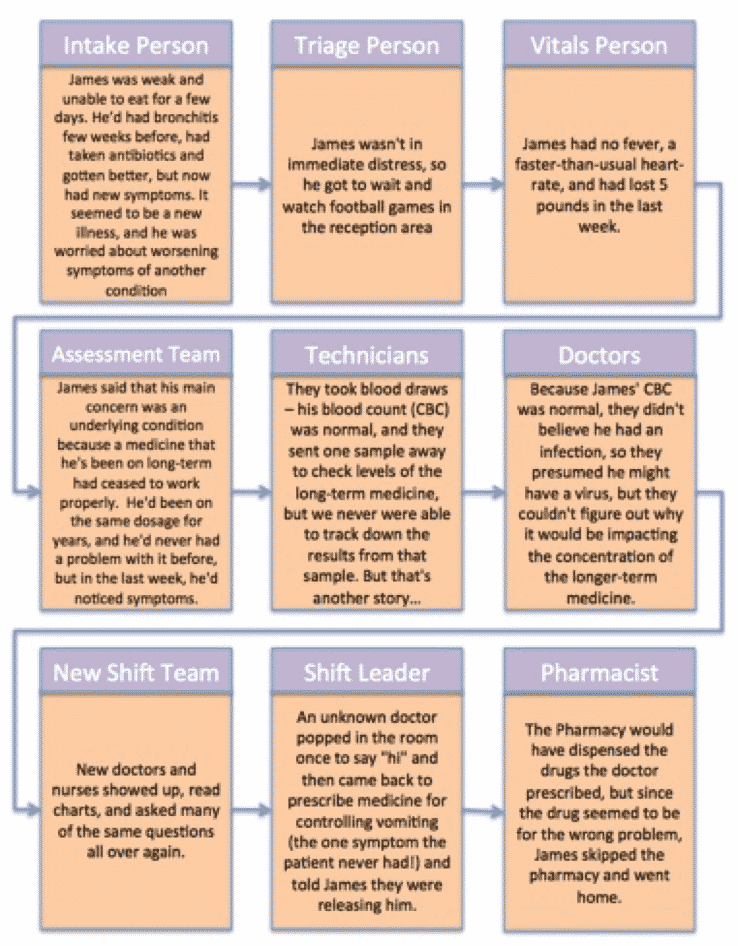 Here’s what the various roles learned from James and decided to do:

James called and talked to us after his trip to the emergency room. We were all frustrated, and so we got him to go over all of the above information once more.

And then we knew what it was! The exact same thing had happened to him when he was a baby, and my mother had told us how to fix it back then. Just like the healthcare providers, we had all missed the cause this time, mostly because we hadn’t considered the whole story all at once.

Just like the healthcare providers, we had all missed the cause this time, mostly because we hadn’t considered the whole story all at once.

One of our favorite TV shows used to be “House.” The show was a parody of Sherlock Holmes mysteries, where a brilliant, drug-addicted doctor (named “House” instead of “Holmes”) solved mysterious illnesses with a special team who were both experts and innovative thinkers.

Paraphrasing Dr. House, “The simplest solution that explains all the symptoms is probably the root cause.” That concept is also called “Occam’s Razor.” Sadly, in order to apply that concept, you have to know the whole story! The different people in the assembly line knew different parts, but none of them put the simple pieces together.

We asked him, “Did you eat any yogurt after the antibiotics were done last week?” Nope. The antibiotics from the prior illness had wiped out the “good bacteria” in his digestive system, leaving him unable to process food. The long-term medicine concentration wasn’t the cause; it was an effect. His system wasn’t digesting food, and it somehow wasn’t digesting his medicine properly either! As Dr. House and Sherlock Holmes would have theorized, everything was related.

James took some yogurt and a couple of live probiotic pills, and he was fine the next day.

While some healthcare systems have invested in electronic records, handheld technology, and better documentation to overcome functional barriers by allowing the various roles to communicate better, we’ll also continue to support a simpler and very Lean solution: single-piece flow. 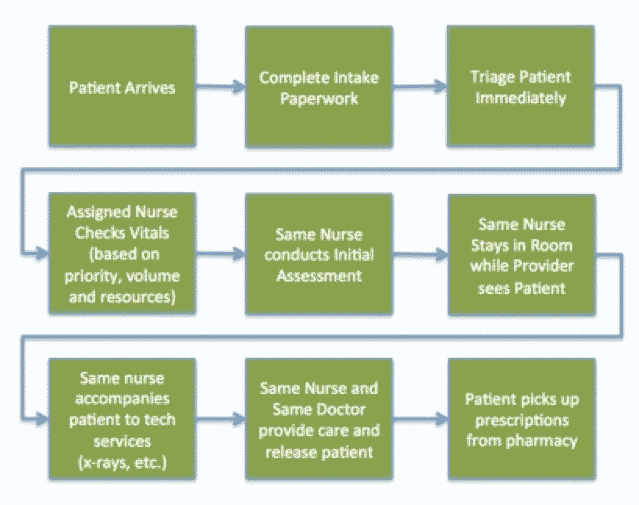 One practitioner would know everything. Obviously the process would have to have some options to overlap shifts to match capacity to demand, divert resources if another serious case arrives, etc., but by cutting out the handoffs during normal operations, the overall process might get to the right answer more quickly. It might actually be better for the patients and more efficient for the hospital too!

Of course, the point we’re trying to make here isn’t just about healthcare. Healthcare is just a relevant example because almost everyone has had a similar experience at least once. The point is that the assembly line itself can have unintended consequences for quality as well as productivity, and assembly lines are everywhere.

The point is that the assembly line itself can have unintended consequences for quality as well as productivity, and assembly lines are everywhere.

That said, the healthcare industry is seeing the assembly line paradigm begin to change. Many healthcare systems are already implementing Lean principles, so this story shouldn’t imply that all healthcare experiences will be the same. Some have even started to combine some of the roles as suggested above, and there are assuredly reasons that certain roles (e.g., doctors) need to stay differentiated.

But it’s no surprise that Lean principles are making their way into almost every industry, including this one!

Are you seeing Lean principles making their way into your industry? If so, please share how you’ve seen or experienced it. We’d love to hear from you.

As the Managing Partner for Implementation Partners LLC, Dodd leads transformational strategy and performance change efforts for a diverse set of clients, tailoring each client’s journey toward a culture of excellence. Implementation Partners exists to inspire and enable every leader to transform their organizations by giving every employee a chance to contribute their best work on an engaged, sustainable, winning team.
Poll
Need great pricing for your team?
Get a Quote
[templatera id="117317"]
Copyright GoLeanSixSigma.com - All Rights Reserved
Cart
Search